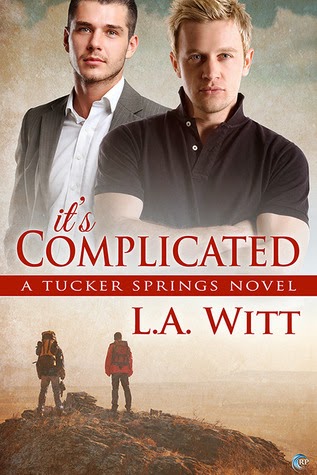 After their umpteenth breakup, Brad Sweeney and Jeff Hayden are living apart and starting over from scratch. The morning after a promising first date, they’re more optimistic than ever that they can make it work this time . . . until Jeff’s ex-wife and business partner calls to announce she’s pregnant with Jeff’s baby. Brad’s already competing with a demanding business for Jeff’s time. Now there’s a baby on the way, and worse, he’s afraid Jeff is still carrying a torch for the woman who’s carrying his child.

Jeff is desperately trying to keep his life together, but before he can even get his head around the news that he’s going to be a father, his ex announces that she wants to leave Tucker Springs. Now he either has to take over her role at the shop while ferrying the baby back and forth from Denver, or move the business—and himself—with her.

Brad and Jeff knew reconciliation wouldn’t be easy, but they’re rapidly running out of room for compromise. And sooner or later, something has to give.

There is something very precious and real with the Tucker Springs Series. Each book deals with real or very heartfelt situations that tugs at your heart.  Like all Tucker Spring novels it can be read as a stand alone.

In this book their situation is very realistic to what most face in their relationships.  Of fighting for your relationship work, while questioning if the fight is worth it or not.

Brad and Jeff have been having troubles for awhile but they are determined to make it work but on one of their 'breaks' Jeff sleeps with his ex wife and gets her pregnant causing more stress and a bigger riff in their already very fragile relationship to begin with.

" ... sometimes I can't tell if Jeff and I are getting our shit together or if we just don't have the energy to fight anymore."

I did like this story but sometimes it was too close to home for me with the reality of their fight.  (Minus the part where my partner which would be my husband in this scenario getting his ex pregnant. The part where we have to really fight and work to make our relationship work). Often when this happens it loses some of the essence or magic of a book as I can't escape as much as other reads.

Having said that lots of people will want to read this just for the simple fact realizing that they are not alone and this is a very real scenario that most face daily.  For Brad and Jeff they give it their all and find their balance.

The question is ... Is love enough?

I am such a fan of L.A. Witt with all of her writing and she did not disappoint me with this book.  She has such a knack at capturing the emotions, angst and love in the MM world.