We have been dying to bring you this Release Week Blitz for Fisher Amelie's FURY! FURY is a New Adult Contemporary Romance and the third book in Fisher Amelie’s The Seven Deadly Series!! Grab your copy today and if you haven't had a chance to read the entire series yet, get on it IMMEDIATELY!

FURY Synopsis: Revenge is an euphoric thing. Trust me on this. Nothing compares to the release you get when you ruin someone’s life. When they’ve stolen important things. Things that didn’t belong to them. Things I revel in making them pay for. What? Have I offended you? I’m not here to appeal to your delicate senses. I have no intention of placating your wishes or living within your personal belief system nor do I care if you hate me. And you will hate me. Because I’m a brutal, savage, cold-blooded murderer and I’m here for my revenge. I’m Ethan Moonsong...And this is the story about how I went from the world’s most sacrificing man to the most feared and why I wouldn’t trade it for anything in the world.

Check out the FURY Trailer!

Add FURY to your Goodreads!

And don’t miss the first two books in the Seven Deadly series!

About Fisher Amelie: Fisher Amelie resides in the South with her kick ace husband slash soul mate. She earned her first ‘mama’ patch in 2009. She also lives with her Weim, Jonah, and her Beta, Whale. All these living creatures keep the belly of her life full, sometimes to the point of gluttony, but she doesn’t mind all that much because life isn’t worth living if it isn’t entertaining, right? Fisher is the author of The Seven Deadly Series, The Sleepless Series, and The Leaving Series, and was a semi-finalist in Amazon’s Breakthrough Novel Award.

Source: eARC for Honest Review Courtesy from Author and Inkslinger PR
Genre: NA Contemporary
Part 3 in an ongoing series but can be read as a standalone

First off.  I frickin' love Fisher Amelie.  I have LOVED every single book she has written.  Her books have such heart  and meanings within them.

Oh! Ethan Moonsong. Whom we first meet in Greed (book #2 in this series).  In Greed he gets heartbroken and develops loads of rage and fury that he doesn't know how to channel or get rid of.  This book is written in a way that it can be read as a standalone but it's such a great series that I recommend reading the whole series so you get a true vibe on all the raw emotions and sins that we all have to deal with.

"I think- No, I know you're lying.  Like I said before, you're a terrible liar.  I think you've lied so often about wanting to be left alone, though, that you've convinced your head it's the truth, but you can't convince the heart, Ethan.  You know why? Because the heart can't ever be lied to, and your beats the loneliest I've ever heard."


As Ethan is licking his wounds he runs into someone from school who used to have a crush on him, Finley Dyer.  Instantly this reunion is exposing emotions he's not sure how to deal with.  But he does know even though he is a bit confused he needs and wants this new found friendship with Finley.

"A broken heart is terrible, Ethan.  I know it's terrible, but its also a part of being human.  You're allowed to be tossed about in love sometimes.  It sucks but it's not the end of the freaking world.  It's not worth a homicide conviction."


Finley quickly inserts herself into Ethan's life causing them to be instant best friends.  Even though this friendship mean a lot to both of the Finley had already committed to a volunteer project in Vietnam.  At first she is tight lipped about the reason why she is going as she wants to keep her past from Ethan.  The last thing she wants is Ethan's pity. 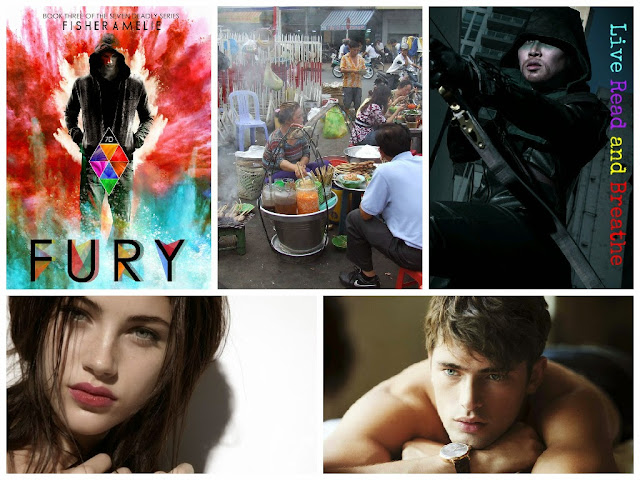 As soon as she's gone Ethan realizes that he wants so much more from Finley then he originally wanted.


"A man doesn't quit the drinkin' caused by one woman unless there's another worth stopping for."


So now he goes to meet with Finley to help and protect her any way he can knowing that her trip is much more dangerous than she let on.


Finley at first is livid that Ethan is there but then realizes that she needs Ethan just as much as he needs her.

"This love is reserved for nothing but adoration, intense attraction, for a different, singular type of devotion.  This love I feel for you I feel because I love you just as you are and not for what you can give me.  It's an unselfish love.  And oh my God but I love you, Fin. So, so much."


Ethan is quickly thrown into the reality of this situation and his emotions get convoluted causing him to take matters into his own hands.

"I was so desperate to keep you that I lost you.  If someone gives themselves to you freely, you just have to accept the gift."


Holy Shit balls! Did Ethan take things to an extreme.  As I was reading it my jaw was almost to the floor.  I was so shocked how extreme he went at times but you get to understand the torment that he is is struggling with.   As with all of Fisher Amelie's books they are so beautiful, raw and real with such potent messages.   There is such beauty within these sins for these characters.  Ethan and Finley have such demons but their love for one another is the reward at the end of that dark tunnel.  It was great book and is an amazing series.  Very recommended.

4 Full of Rage Thumbs up!