Lose yourself to the dark and glamorous underbelly of the Upper East Side in USA Today bestselling author K.A. Linde's new billionaire romance Cruel Trilogy. She was supposed to be a one night stand. A way to sate my sexual appetite. I let her glimpse the man I am. The face that I hide behind my carefully cultivated life. But she ripped open that divide--and there's no going back. Now, she's here. In my city. I don't care that I'm Manhattan royalty and she's the help. Only that she's living in my summer home. With me. And I want more.

K.A. Linde is the USA Today bestselling author of more than fifteen novels including the Avoiding series and the Record series. She has a Masters degree in political science from the University of Georgia, was the head campaign worker for the 2012 presidential campaign at the University of North Carolina at Chapel Hill, and served as the head coach of the Duke University dance team. She loves reading fantasy novels, geeking out over Star Wars, binge-watching Supernatural, and dancing in her spare time. She currently lives in Lubbock, Texas, with her husband and two super adorable puppies.


I was in the middle of reading a different series when this came to my kindle and I tried to start it but came across too predictable.  So, I put it aside then after I finished the other series I gave this another go, and I'm glad I did.  Yes, there were elements that were quite predictable but I was still able to get enraptured into the story and into Natalie and Penn.

This book starts off as if we know the back story which threw me off at times then the prequel appeared and that helped ALOT.  It wasn't necessary but it helped to understand a bit more and to meet the couple before the predictability started.  I wish I had read it first as it would have changed my experience reading this story.


Because this is a series we are left with a tiny cliffhanger or more like a hook to continue to read the series.  I also think this is where the predictable will end and other possibilities will emerge.    Both Natalie and Penn have some growing to do so we will see where it leaves us with Cruel Fortune. Can't wait for more Nat and Penn!!

3 Money isn't everything thumbs up!

I'm leaving this review a bit vague because since there were elements that were predictable I don't want to ruin it by giving more away.  :) But Nat and Penn I think are going to be worth the journey.

Posted by Live Read and Breathe at 08:09 No comments: 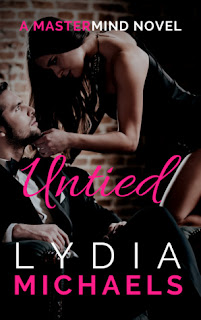 
he·ro: /hirō/ (n.) : an admired individual who acts courageously in the face of adversity, often risking his or her own safety for the wellbeing of others without seeking recognition for acts of duty. (e.g. Everything Elliot Garnet is not, but wishes he could be.)

Elliot Garnet has never been popular. His aptitude and single-minded focus on success has earned him a fortune but has led to a solitary existence and a desire to keep his private life private. Romance holds little temptation, but there’s one woman who never fails to unravel his composure. Except, she’s so far out of his league they only ever speak in his fantasies, until fortune—or fate—causes their paths to cross again.

Fan·ta·sy: /ˈfan(t)əsē/ (n.) : an imagined occurrence that is so improbable it has no basis in reality. (e.g. Nadia Rosza, the exotic goddess and object of Elliot’s most carnal desires reciprocating his feelings.)

With a revolving door of attractive men entering and exiting Nadia’s life, she’s yet to find Mr. Right. And after a disastrous date with yet another Mr. Wrong, she’s doubtful she’ll ever find true love, until an unexpected hero comes to her rescue. Elliot’s reserved, quiet nature lures her in, but the moment she gets too close he pulls back, tempting her all the more.

She’s an impulsive romantic and he’s a methodical realist. Their volatile chemistry ties him in knots, and despite his efforts to hide his painful past, Nadia slowly unravels his secrets and Elliot becomes unhinged, uncensored … untied.

Source: eARC for Honest Review Courtesy of Author
Genre: Adult Contemporary Romance
Part 2 in an series but could be read as a standalone


"I know, but some risks aren't worth the consequences."

"But are they worth the reward?"

It has been quite awhile since I read Blind.  But that didn't hinder my reading experience at all.

A starter to this book is that there are group of friends whom were quite the geeks in high school but are all now successful billionaires.  However, none of them are up to speed fully on the whole dating thing.   This time around we get the super shy Elliot who tries his hand at love.

For most Elliot comes across as bit of an ass, but that his protection mechanism.  Deep down he's just a shy boy who got hurt young and is scared to let others in.    The moment Elliot laid eyes on Nadia in the book Blind he was done for (well secretly, as we didn't know how he felt until this book).

He thinks he has no chance with Nadia but when he meets up with her again and she needs a bit of saving he jumps at the opportunity to help her out.

Poor Elliot has a steep learning curve with love and fumbles his way through it.  I liked watching Elliot's evolution and him finding what life can be like once he let his guard down.   A lot people think the beautiful have no issues as Elliot thought with Nadia, but she too had her own baggage which caused some riffs in this new found arrangement.

The epigraphs were absolute perfection and picked so brilliantly.  They were one of my favorite parts of this book.

Posted by Live Read and Breathe at 06:00 No comments: