Be the Girl by K.A. Tucker #bookreview #YA #sportsYAromance 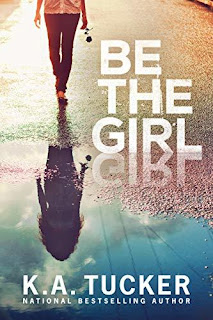 Be The Girl
K.A. Tucker
Almost sixteen-year-old Aria Jones is starting over. New postal code, new last name, new rules. But she doesn’t mind, because it means she can leave her painful regrets behind. In the bustling town of Eastmonte, she can become someone else. Someone better.

With the Hartford family living next door, it seems she will succeed. Sure, Cassie Hartford may be the epitome of social awkwardness thanks to her autism, but she also offers an innocent and sincere friendship that Aria learns to appreciate. And Cassie’s older brother, Emmett—a popular Junior A hockey player with a bright future—well … Aria wishes that friendship could lead to something more. If he didn’t already have a girlfriend, maybe it would.

But Aria soon finds herself in a dicey moral predicament that could derail her attempt at a fresh start. It is her loyalty to Cassie and her growing crush on Emmett that leads her to make a risky move, one that earns her a vindictive enemy who is determined to splinter her happy new world.

It has been awhile since I read anything from K.A. Tucker and it just reminded my why I love all that is K.A. Tucker.

I quite liked this book, it was relevant and emotional.

Too often story arcs are obvious in what direction they are heading, in Be the Girl it kept me on my toes and gave me surprises in direction which ended up having way more impact in the end instead of the assumed direction I originally thought it was heading.

Bullying is too relevant these days and with social media it is even a bigger issue. I thought this story nailed it on all aspects on how bullying can effect multiple people not just the intended target.

I adored Cassie and thought she was so well written. Emmett was amazing and an amazing big brother to Cassie. Aria was the crap shoot. At first I wasn't sure how her character was going to unfold and I made a lot of assumptions which were all wrong.

When we found Aria's truth I can see why many could turn on not liking her character but life is about hiccups and hurdles and its in those events where we learn life lessons. It is just how we choose to learn from them. To make things better or continue down the same path.

I liked Aria's growth as a character and I thought she was so well written. Her relationship with her mother and uncle were great. I adored her banter with Emmett but I also loved her friendship with Cassie and that friendship and learning from her past helped her grow to the person she became.

I liked that Emmett was the 'big guy' on campus but he and his friends were super sweet and kind.

My biggest regret in this story is the epilogue ended at the end of their school year, I would have loved to see a glimpse of what happens 5 or 10 years from now and see how things worked out for Aria, Emmett and Cassie.

Posted by Live Read and Breathe at 19:54 No comments: