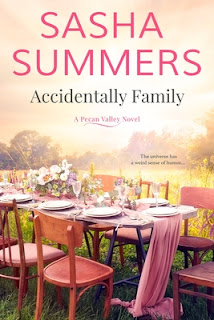 Life for Felicity, and her teen children, is finally back on track. After her divorce, she wasn’t sure if her sweet family would ever be the same. But things are good––right up until her ex’s spirited toddler lands on Felicity’s doorstep. If the universe is going to throw lemons at her, thank God she has her best friend, Graham, to help her make lemonade out of them. How did she never notice how kind and sexy he is?

Graham is still recovering from his wife’s death years ago and trying to help his teen daughter get her life together. Who is he kidding? His daughter hates him. Forget lemons––he’s got the entire lemon tree. So when Felicity suggests they join forces and help each other, he’s all in. And suddenly he can’t stop thinking about her as more than just a friend. Too bad their timing couldn’t be worse…

Because life rarely goes as planned. Luckily there are many different kinds of family to hold you together and lift you up...plus maybe even a little love between friends.

It had been years since I read anything from Sasha Summers then after reading Jace and getting reacquainted with Sasha I jumped at the opportunity to read Accidentally Family.

From the first page I was hooked.   Felicity is a kind, strong woman whom got hurt by her ex-husband, but that didn't stop her from loving her kids and being a good mom.   What starts as one shining moment turns into tragedy leaving Felicity to pick up the pieces.

Her ex asks her the most unthinkable request but Felicity is all heart and honors it.

Graham was Matt, her ex's best friend and business partner.   While he's still dealing with the aftermath of the death of his wife and trying to repair his relationship with his daughter, he ends up wading in to help Felicity and her kids.

Sure the plot was predictable but it didn't matter because it was done in such a beautiful way.   The main story evolved around Graham and Felicity but we also got the story of Honor, Nick, Charity, Owen, Diana and Jack.   Each character was portrayed very well and you felt all their joys and tribulations.  I know this is a standalone but I hope it blossoms into more because I would love to see what happens with the other characters like Charity and Braden or Honor and Owen. That way we'd a also get more from Graham and Felicity.

There were so many layers with this story.  It had so much heart and dealt with the complexities of family.  Blended families are never easy but it's especially hard when there has been so many hurt feelings involved.  This story did such a great way on showing those issues and how they were able to find a way to move on and see the future instead of holding onto those past hurts.

Posted by Live Read and Breathe at 07:00 No comments: 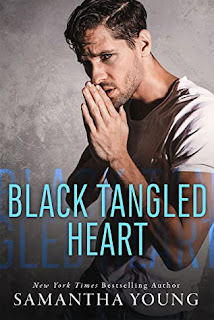 To my siblings, Jane was a friend. A pseudo-sister, the girl we grew up with.
To me? She was everything.
Our passion consumed us.

When our world fell apart, I thought our love would be the thing that held us together.
She was the love of my life. But she abandoned me when I needed her most.
And I'll never forgive her.

For years I've been planning my revenge against the people who took everything from me.
Jane won't be an exception. I’m coming for her.
She knows it.

She says she wants to help me serve my version of justice on the people who hurt me.
I'll let her.
She probably thinks it will save her from me.

*This is a complete standalone. The Play On series are books connected by the theme of the arts industry, not by characters.

I have always adored Samantha Young and she has given us another amazing story in Black Tangled Heart.   This time around we have Jane doe and Jamie McKenna.   Their story was heartbreaking yet poignantly beautiful.

Jane was wiser than her years and such a great character.  We could all learn from someone like Jane in our lives.  She didn't let what happened to her define her, instead she became a strong independent strong soul who can live each day to her fullest and see the worst in people but gave them the benefit of the doubt until they proved her wrong.  Then she made clear boundaries.  She was fierce and loyal.

" . . . I think we walk through the halls at high school thinking no one can understand the crap we've been through, but almost everyone has a secret.  A pain they don't talk about."


Jane meets the McKenna's when Lorna befriends her early on.   I originally liked Lorna but she ends up not being so nice.  Lorna's character was written very well that you understood why she behaved the way she did, but you were also still hurt by her actions because Jane gets into your hearts.

Through Lorna comes Skye the big sister and Jamie the grumpy brother.  The moment Jane sees Jamie she knows something is different but it takes some years for Jamie to truly see Jane.

"No one has ever loved her right, except for you.  Not even Lorna.  When a guy comes along, he needs to lover her hard.  To make up for all the times people forgot to lover her."  Or the times it was taken away from her, like with her adoptive parents.  Just the thought of Jane feeling unloved made me want to punch a fist through the wall.  "I plan to be the guy who loves her like that."

Jamie starts as such a grumpy angry teen but he grows into something so much more.  Then his world implodes.  He was well written and you got to feel his pain and resentment.

The way the book was written,  reels you in that you are entrenched into the story.   You are pulled along their journey of love and heartbreak.   We get the past where we see Jane and Jamie find each other and then we get the present on how things are.   There is suspense. There is intrigue.  There is revenge.  There is heart break, and there is also so much love.

"But I survived you, Jamie.  I survived you then, and I will survive you now.  You know why?  Because I have to believe that one day, someone will come along who loves me so much,  he could never imagine a world in which he'd abandon me."

I know stories need angst and I understand that but assumptions and lack of communications are the bane of our existence in real life so when I see them in stories all the time I get frustrated because there wouldn't be so much pain if people just communicated in real life or fiction.   With a love like Jane and Jamie, at times I was frustrated they didn't confront one another.  Thankfully we got the bottom of this and yes that part was a bit predictable though I was happy to get the resolution.

Even though I was a tiny bit frustrated with the communication issue it still was a great story and had a great ending.   I wasn't sure how it was going to all play out in the end but I got the ending I wanted.  I loved Jamie and Jane together.

Posted by Live Read and Breathe at 07:00 No comments:

Luna and the Lie by Mariana Zapata #bookreview 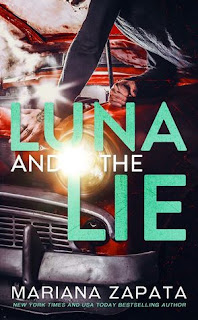 Luna and the Lie

The problem with secrets is that they’re too easy to keep collecting.

Luna Allen has done some things she would rather no one ever know about. She also knows that, if she could go back in time, she wouldn’t change a single thing.

With three sisters she loves, a job she (mostly) adores, and a family built up of friends she’s made over the years, Luna figures everything has worked out the way it was supposed to.

But when one of those secrets involves the man who signs her paycheck, she can’t find it in her to regret it. Despite the fact that he’s not the friendliest man in the world. Or the most patient.

Sometimes there are things you’re better off keeping to yourself.

~All I had ever wanted was to be loved.~


Luna has had a rough life but she is full of love to give.  She takes care of her younger sisters since her family wouldn't and she's done it all on her own with no one's help.   She's a painter at body shop and everything about her is kick ass.  She's real and relatable and super strong.

She's a breath of fresh air with everyone around her, yet most of her family can't appreciate the gem that she is.   She has two bosses.  One is Mr. C and he's like her pseudo dad where is Mr. Ripley or aka as Rip is a large man of little words.

I loved the banter between Rip and Luna as they became friends.   The way Luna was able to chip away at Rip's rough exterior to get in.

"Eh, Rip, you're size ginormous and my couch is size normal."


There was just something special about Luna that hit me right in the heart.  I don't know if it was the being let down by family or just wanted to be loved that got to me, but she was written so well that you felt her pain.

"I don't dislike a single fucking bone in your body, Luna."


This was such a great story.  It had many layers to it and it sucked me in from the start.  I couldn't put it down as I was rooting for Luna to find what she has always wanted.   And Rip couldn't have been more perfect for her.

Posted by Live Read and Breathe at 05:00 No comments: