Until It Fades by K.A. Tucker #bookreview #sportsromance #preorder 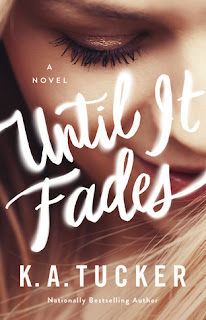 Twenty-four-year-old truck stop waitress and single mother Catherine Wright has simple goals: to give her five-year-old daughter a happy life and to never again be the talk of the town in Balsam, Pennsylvania: population two thousand outside of tourist season.

And then one foggy night, on a lonely road back from another failed attempt at a relationship, Catherine saves a man’s life. It isn’t until after the police have arrived that Catherine realizes exactly who it is she has saved: Brett Madden, hockey icon and media darling.

Catherine has already had her fifteen minutes of fame and the last thing she wants is to have her past dragged back into the spotlight, only this time on a national stage. So she hides her identity. It works.


It has been forever since I read a K.A. Tucker book and what a mistake that was.  I forgot how much I love her writing.  And I absolutely loved this book.  I can't remember the last time I read a book that I couldn't put down and had to keep reading.

Catherine Wright is a single mom and Brett Madden is a hockey icon and media darling.

Catherine Wright has made some bad choices but she was only a teen so you can't blame her.  Unfortunately the consequences of her choices are still leaving a mark on her.

Clearly, the scars from Scott left me with run much deeper than I'd like to admit. "Come on, please? Just do it and see where it leads.  Give me at least a shred or hope before I start dropping cats off on your doorstep."

Catherine may have been at the right place at the right time or fate was intervening but she ended up on a stretch of road that changed the lives instantly of all that were involved.  After a split decision to save the stranger about to burn up, she just wants her life to stay normal but it will now be anything but after she saved NHL star Brett Madden.

Brett just wants to meet the person whom saved him, but he didn't expect to fall head over heels for that same person the moment he met her.

"Why do people even care?  They don't know us.  What happens between us has no impact on them."
"Because it's like a fairy tale!"

The last thing Catherine wants is to be in the spotlight but she now can't get away from it.  Unfortunately her scars run deep so she can't see far from her mistakes.

"What do you mean, why?"  He chuckles.  "Because I'm crazy about you and you won't even answer my calls.  I need to know how to fix that so you'll give me a chance. Please."

Brett has to fight like mad to convince Catherine to give him a chance.  It's not easy for her especially because her whole life is upside down.  Some for the better but its still all different and she's having a hard time with all the changes.

"Life is too short to do what other people think you should do.  That's what I know."

One of my favorite characters is her daughter and how smart she's for such a young age.


Taking risks are tough and living life in fear is tougher.  For Catherine, all she knows is how to survive, not how to live.   So, even though she's still making bad choices she doesn't know any different.   Brett is determined to have his HEA and that includes Catherine and all her choices good and bad.  But it won't be an easy road when its full of insecurities and fear but at least their is hope as well.  Which will make it worth the risk.

"Just remember that you're not alone in any of this. You have a lot of people who care about you.  Including your family.  And you'll find that you can deal with a lot more than you realize."  He pauses.  "If you decide that it's worth it."


Everything about this story I adored well almost everything.  Except the dreaded . . . giggles.  Argh! I hate gigglers in fiction and that was truly the only thing I didn't like.   Until It Fades captivated me from the beginning to the end.  I adored it and loved every second of the story.  It's been forever since a book as done that and I'm so happy I got that experience again with this book.  I can't wait for more K.A. Tucker, and this time I won't let so much time lapse between reading her stories.