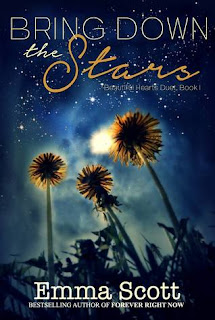 Bring Down the Stars

I fell for Connor Drake. I didn’t want to; I fought against it, but I fell in love with him anyway. With his words. With his poetry. With him. The gentleness and beauty of his soul that speaks directly to mine. He writes as if he can feel my heart, hear its cadence and compose the exact right lyrics to accompany every beat and flow.

I’m in love with Connor…so why do I feel an inexplicable pull to his best friend, Weston? Grouchy, sullen, brooding Weston Turner, who could cut you down with a look. Fiercely intelligent with a razor sharp wit and acid tongue, he’s the exact opposite of Connor in every way, and yet there’s electricity in the air between us. The thorny barbs Weston wraps around himself can’t keep me away.

But the more time I spend with these men, the more tangled and confused my emotions become. When they both sign up for the Army Reserves during a time of increasing strife in the Middle East, I fear I’ll never unravel my own heart that sometimes feels as if it will tear straight down the middle…for both of them.

**********
Bring Down the Stars is an emotional, angst-filled novel of unrequited love by bestselling author, Emma Scott, and is inspired by the classic tale, Cyrano de Bergerac. (Roxanne) It is Book I in the Beautiful Hearts Duet, coming this summer. Book II, Long Live the Beautiful Hearts, to be released a few weeks later. THIS IS NOT YOUR TYPICAL LOVE TRIANGLE #confusedhearts #notamenage

My Bringing Down the Stars Review . . .


This books starts as a modern day Cyrano de Bergerac but turns into so much more.

Weston Turner has a burden to carry which weighs down his heart. Thankfully the friendship, and support from his best friend Connor and his family helps carry him through. Wes is not one to take handouts which creates more burdens that he feels like he owes Connor's family everything.


"Maybe pain exists to make us appreciate the beauty."

So when Wes and Connor have the crush on the same girl he let's Connor win, but Connor needs Wes's help to make this happen. This is where the Cyrano de Bergarc story line comes into play.


As Autumn gets to fall for Connor in person she truly falls for his words. But real life Connor and paper Connor aren't the same person.

~ My heart ached as pieces of Weston Turner clicked into place for me.  Not an asshole, but an abandoned, bewildered kid, grown into a man, chasing that car, always. ~


The more Autumn falls for Connor the more it breaks Wes. Connor has his own issues with the demands and expectations of his family. So when he signs up for the army, Wes has his back with both leaving Autumn behind.

" . . . A writer who chooses an economics major.  A runner who ignores his gift.  A poet's heart now encased in a warrior's armor."


We all need a champion like this in our corner. Professor Ondiwuje was written so brilliantly and he was such a key part of this book.

I absolutely loved this book and can't wait to see how it all plays out in book #2. 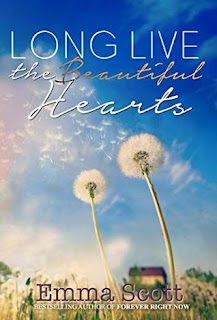 Those were my vows, and after all that had happened with Connor and Weston, I was determined to keep them. To protect my heart.
And then he came home, and my vows became his promises.

He held my heart in his hands with reverence and care.
He helped me find my soul’s greatest purpose in life.
He loved me with a love so pure and vibrant, I knew I’d never feel anything like it in a hundred lifetimes.
It was real.

Until it wasn’t.
Until it all came crashing down when I discovered the deep love I thought I’d found was nestled in a web of lies—so soft and silken I hadn’t noticed it was there.
Until it was too late.


This book starts with Connor and Wes in Syria fighting for their lives and dealing with the aftermath of their decisions.

Both Connor and Wes come back but also not whole.  And both have to deal with that aftermath on their own.

Once returned Autumn starts to learn the truth of Connor and Wes and it breaks her heart but eventually she starts to befriend Wes again and fall for the real him not just his words.   But this is not an easy journey for both of them.

Here are just a few examples how this book stole my heart:

"Stay with him.  And keep holding his hand, Autumn.  No matter what happens. Don't let go of him."


"Is this some kind of pep talk?"  "Straight talk," he said.  "The universe doesn't make mistakes."

"My God, Wes." he said. his voice cracked.  "Nothing to fight for?  Fight for you.  For who you are.  At long last, fight for yourself and what you love.  Who you love."


"But here is the secret: every Once Born is a Twice Born who hasn't yet discovered their strength.  I've seen your heart and heard your words, Wes.  You will survive this. You're a poet encased in warrior's armor.  You will come out the other side, but you must take the first step forward.  There is no other way."


" . . . In my mind, Wes, that has always been the fault of our armor; you have built it so strong that it doesn't protect you so much as it hurts you to carry its impossible weight."


"I've loved you for so long.  Meeting you in the library that first time felt like a reunion.  I've loved you in a thousand lifetimes.  Do you feel it?"


"You owe me nothing.  The only thing I want from you is to live your life with truth, honor, and respect for the dreams and talents of your heart."


I loved that what happened to Wes didn't define him, and was only just another challenge for him.  He already had enough burdens and this didn't become another instead it forced him to fight all his demons and let go of his armor.  Which gave him the opportunity to truly live freely and be able to love and be loved in return.

From what I gather this duet was written in the before and after of the author's personal tragedy and you can feel the pain and emotion in her writing and its moving and beautiful.  This duet was so much more than a story.  It's something I think everyone should have to experience.    It took my breath way the depth of emotions it stirred up in me.

Posted by Live Read and Breathe at 20:57