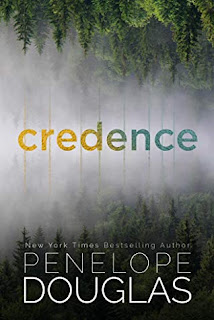 by
Penelope Douglas (Goodreads Author)
Tiernan de Haas doesn’t care about anything anymore. The only child of a film producer and his starlet wife, she’s grown up with wealth and privilege but not love or guidance. Shipped off to boarding schools from an early age, it was still impossible to escape the loneliness and carve out a life of her own. The shadow of her parents’ fame followed her everywhere.

And when they suddenly pass away, she knows she should be devastated. But has anything really changed? She’s always been alone, hasn’t she?

Jake Van der Berg, her father’s stepbrother and her only living relative, assumes guardianship of Tiernan who is still two months shy of eighteen. Sent to live with him and his two sons, Noah and Kaleb, in the mountains of Colorado, Tiernan soon learns that these men now have a say in what she chooses to care and not care about anymore. As the three of them take her under their wing, teach her to work and survive in the remote woods far away from the rest of the world, she slowly finds her place among them.

And as a part of them.

She also realizes that lines blur and rules become easy to break when no one else is watching.

One of them has her.

The other one wants her.

He’s going to keep her.

*Credence is a new adult standalone novel suitable for readers 18+

It has been a long time since I read anything from Penelope Douglas and what a mistake that was.  This was great I don't know why I took a break from this amazing author.

Tiernan was the daughter of the Hollywood super couple, but she was also completely alone because her parents cared about themselves not her.  So, when they were gone, Tiernan was left alone with no home and no family besides her mother's assistant Mirai, whom is the closest thing she has to family.


Her father's estranged step brother comes out of no where to help her until she turns 18.  It wasn't quite the help I would expect from a step uncle and step cousins but it gave her what she needed in all aspects of her life.

~ I'm desperate for attention and confused. ~


This story line was way outside the box in story telling which I appreciate.  There were times that it made me very uncomfortable with the content but that is okay because uncomfortable is important, because it means you are experiencing the book instead of going through the motions.

~ Something about this house-these people-lend credence every day to what I always knew I needed.  Not sex.  Not a guy.
Just a place.  Somewhere or someone to feel like home.~


~Because I'm only worth anything if someone wants to love me.
Just like with them.~


Even though the story line was not conventional it sure did have a lot of steam.

Tiernan was so young and the relationship with the new men in her life was unexpected.   Having Kaleb mute was perfect because it helped the story so much.   Their connection was so visceral and you felt their torment.  It was accentuated because Kaleb didn't talk instead you just felt.


I also liked how it the story ended with no loose ends or awkwardness where there could have been tons from what happened to them all.  This book was so much more than I expected.  It had drama.  It had loads of steam.  It had heart.  It had love.  It had family.