Worked Up (Made in Jersey #3) by Tessa Bailey ~ #bookreview #releaseday 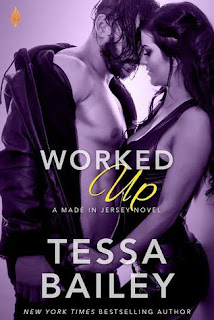 Factory mechanic Duke Crawford just wants to watch SportsCenter in peace. Unfortunately, living with four divorcee sisters doesn’t provide much silence, nor does it change his stance on relationships. But when a fellow commitment-phobe stumbles into his life, getting him good and worked up, he can’t deny his protective instincts.

Samantha Waverly’s brother just put her in an impossible situation. The only way out? Marry huge, gruff, gladiator look-alike Duke—for show, of course. She doesn’t make promises—she knows too well how easily they can be broken—and this is no exception.

As the blistering attraction between them grows, the lines around the no-strings relationship blur. But Duke and Samantha’s marriage is only for show…or is it?

Source: eARC for Honest Review Courtesy of Entangled
Genre: Adult Contemporary Romance
Part 3 of an ongoing series but could be read as a standalone

From the moment I picked up my first Tessa Bailey book I have adored her.  She has such a knack for combining sexy and sweet.  As of late though I have to admit sometimes the balance has changed to more sex than sweet which loses some of the essence of the story.  However, with Worked up the balance is back with the very sweet Duke Crawford and the quirky Samantha Waverly.

Worked Up is the third part in the Made in Jersey series but it could be read as a standalone.  However, if you read Thrown Down first your crush on Duke would have already started.  From the beginning Duke has been a sweetheart.  At first it was for his four divorced sisters, then to his friends Vaughn and River and now to Samantha.

After taking care of everyone in his life all Duke wants is SportsCenter and a beer.  The last thing he wants is a commitment because he knows how terribly they turn out, and he never wants to let anyone down.   Samantha has a dream but after always been let down by others, the only one who can help is her brother, Renner.  Her and Renner had a deal but she couldn't go through with it, which is why she finds herself at the Third Shift in Hook.

The minute she walked into the bar everyone knew she wasn't from there but for Duke it was so much more.

"Why did you immediately start calling me Sam?  You didn't even take a warm-up lap with Samantha."
"This isn't a three syllable establishment."


Duke tries to fight the instant attraction because he doesn't do relationships but he also can't stay away from Sam either.  He tries to do the right thing the first time he sees her but when he runs into her the next day he brings her home like a stray.


I loved the quirky banter between these two characters.  They seem polar opposites but really they just fit perfectly together.   The attraction is so strong they both can't fight it, but they also have to overcome their fears if they want any kind of future. 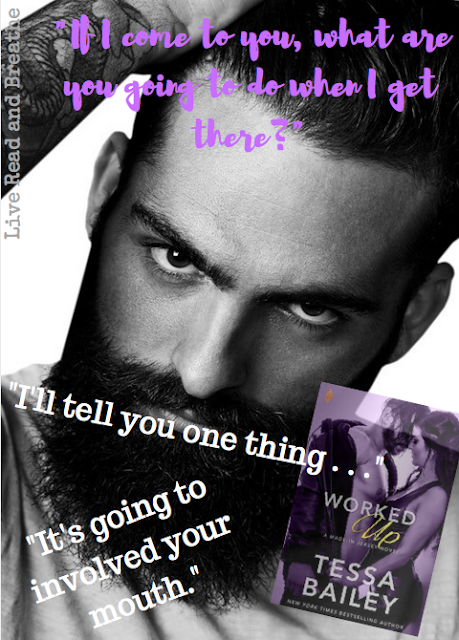 What starts as a bit unconventional between them turns into fire between the sheets.

"I can't see a way around fucking you, Sam.  Giving it to you until you're a whimpering little mess."  Pink swarmed her cheek like bees.
"You should quit your job and write poetry full time."

Even though these two can heat things up, there was still that quirky charm that kept it light.

For two commitment phobe people they sure jumped on the at first lust band wagon and totally pulled it off.  Lust or love at first sight can either flourish or flail in romance books but here it totally flourished.  You felt their instant connection and their continuous draw to one another.  I loved these two together, but as we all know in the romance genre things don't always go according to plan causing some angst.

The moment things are put on the line, Samantha's insecurities get the best of her but good ol' Duke has to make it right and oh boy did he do it.


I loved that Duke was a big giant but when it came to Samantha it immediately softened him causing him to be even sweeter than he always was.  I adored Duke so much he will be making an appearance on one of By Book Boyfriend Mondays as one of my gruffly, sexy sweet faves.

I adored this book!  Duke and Samantha brightened my day.  This series started at bit slow for me but after this book I'm completely hooked and I can't wait for more from this series and this author.

Posted by Live Read and Breathe at 15:47