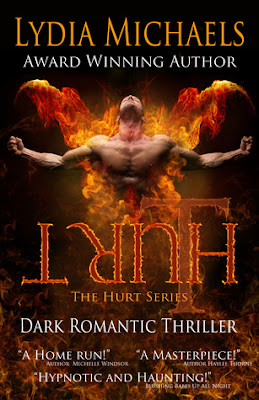 Callan MacGregor might speak with the eloquence of a Scottish poet, but a hard life has turned him into a merciless killer. With a first-hand account of hell, he trusts nothing and no one but the hollow hurt tortured into his bones. Sacrificing all, he must escape Scotland to survive.

Emery Tanner is captivated—to the point of obsession—by the stunning Scotsman tending bar at the Imperial Hotel. With as many dark secrets as he has scars, she hungers to know every exquisite inch of him, but her shy nature leaves her tongue-tied. Despite her sense that innate kindness rests beneath his savage surface, Callan MacGregor is a man to approach with caution—if not fear.

When tragedy strikes and Emery’s world is shattered, she learns just how ruthless Callan can be. Violence has shaped his soul and love has always led to loss in both their broken lives. But as secrets are exposed, they find truth within the hurt and awaken a desire to become whole once more.

WARNING: HURT qualifies as a Dark Suspenseful Thriller and contains multiple scenes of graphic violence, non-consensual sex, and torture. It is also a love story.

I love Lydia Michael and all her stories.  She has taken us on so many journeys with her stories and this time around she takes us through the dark world of Hurt.

This story starts with the back story of Callan MacGregor in Scotland and what he has to go through to take care of his family.  Then one bad decision sets off a world of hurt and the pain Callan goes through is crazy.  It's the dive into dark waters for Callan.


"How strong are you right now? Honestly."
Callan frowned.  "I think I Can tolerate more than a kitten lick, but if someone hit me I'd probably shite myself.  Why?"

Then the books jumps to a couple years later with Emery Tanner in New York, where Callan now works in a hotel with Emery.   It's not long into Emery's world when she too finds a pile of hurt and pain in her life.  Thankfully Callan understands this type of pain and is there to help Emery deal with it.


"Ego's the heart of every man.  The nature of the beast.  But every man needs a friend."

Then the book goes back and forth of present and past, so we get more of the story about what happened to Callan.  We also get the current pain of how Emery is handling what happened to her as well as all the secrets and truths that are Callan.

There is so much pain in this book and the non-consensual sex scenes were very well written that you felt all the pain with them as it was happening.    It is so crazy that it's so relevant and a hard reality for most people, especially woman.  We live in crazy times.


"One in four?"
"That's how many girls are sexually assaulted before they even reach eighteen.  And one out of every five woman will get raped in their lifetime."

Throughout the pain and darkness we were given bits of light where we could watch love bloom within the rubble of misery and hurt.


But hurt was different. Hurt lay beneath flesh and blood, within the hollow of the bone.  Hurt was dark and lonesome.  Hurt was the phantom slap of God that knocked a man to his knees when the rest of the world felt a breeze.

I know this part of a new series so I'm so curious if its going to continue with Callan and Emery or if we get to see into the hurtful world of Innis and hopefully she too can find a sliver of light and hope.

4 love for the win thumbs up