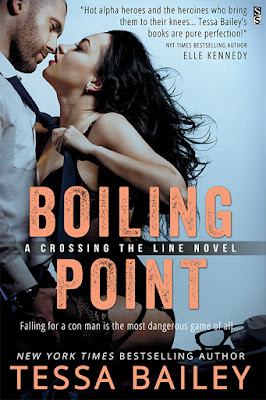 Con artist Austin Shaw's been in disguise so long he's not sure where his fake identities end and he begins. Now that he's been strong-armed into working for a specialized undercover unit working with the Chicago police—criminals with unique “skills”—the last thing he needs is to risk his iron control. Especially when it comes to a certain stunningly sexy hacker who tempts him with every look of disdain.
Polly Banks will never, ever trust a con man. On the trail of a ruthless crook who destroyed the only family she's ever known, Polly is unnerved by the shadow who follows her every move. The one who makes her pulse pound and breath short with lust. Austin. He's infuriating, enigmatic, and pure sex appeal, and she's determined to resist him.
But an untrustworthy man of disguise can become anyone he wants...including a man that Polly must trust if she's to escape their dangerous game alive.
Purchase Links: 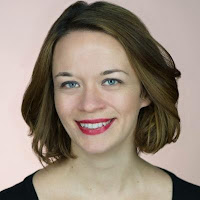 She now lives in Long Island, New York with her husband of eight years and four-year-old daughter. Although she is severely sleep-deprived, she is incredibly happy to be living her dream of writing about people falling in love.

“All yours. You’ve been its cruel keeper for months.” He tilted his hips, presenting himself to her in a way that should have been crude, but on Austin, it was all animal grace. “At any time at all, you could have demanded me. Sent me to my knees to lick you off with one word. Grabbed my cock through my pants in front of everyone and told them who it belonged to.” His eyelids drooped as if the scenario was an aphrodisiac. “Please yourself with me, Polly. My body. My cock. Own it all.”
“I will,” she whispered, shaken by his speech. Emboldened by it. Holding his gaze she lifted the belt to his arousal and looped the leather around its ruddy base. A broken curse fell from his mouth, the muscles of his abdomen jerking. His big hands flew up, as if to grip her shoulders for balance, but they fisted and dropped back to his sides, where she told him with her inaction they must remain. Careful to keep the buckle from touching him, Polly tugged the leather to her right, watching the belt slither around his erection in a circular caress.
“Oh, fuck. Fuck. Fuck.” He swayed on his knees. “More. More.”
Polly leaned close and ran her tongue along the seam of his lips, pulling away when he tried to capture her mouth in a kiss. “Only if it pleases me.”
“Yes.” His nod was disjointed, breathing uneven. “Only if it pleases you.”
“It does.” Faster than the first time, Polly pulled the belt left, whimpering at the sight of his aching flesh being squeezed between the leather strip, the precum that beaded at his tip. She repeated the action twice more, faster and with more surrounding pressure on his length each time. “How does it feel?
“Like nothing else,” Austin groaned, neck muscles straining. “There’s nothing else.”
His declaration made her want to prove him wrong. Or maybe she needed a distraction to avoid feeling humbled. With the decision to stop thinking and experience, Polly grasped Austin’s hand and dragged it up her skirt, between her thighs where his palm conformed to her shape without hesitation, ripping a moan from her throat. “Th-there is something else.”
Austin’s gaze turned intent, fixated on her face. “You need to fuck now, sweet?” There was nothing casual about his perusal of her body. It was predatory filth and it set Polly ablaze. His middle finger pushed at her entrance, through the barrier of her underwear. “Ah God, just set me loose with a yes. I will split the fucking headboard down the middle from bucking into this pussy.”