Wound Tight (Made in Jersey #4) by Tessa Bailey #MMromance #bookreview 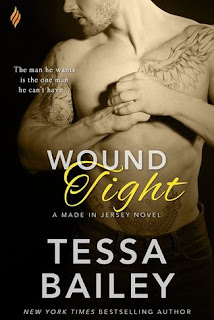 Wound Tight (Made in Jersey #4)

When CEO Renner Bastion walks into a room, everyone keeps their distance. Well, everyone but the sarcastic, tattooed, Boston-bred security guard whose presence has kept Renner in New Jersey longer than intended. As if the unwanted attraction isn’t unsettling enough, Renner finds out his protector isn’t as unavailable as originally thought.

Milo Bautista just came out to his wealthy, ultra-confident boss, a man he secretly respects and admires…in more ways than he’ll admit. Worldly, experienced Renner would never look in his direction, let alone share some of that confidence he wears like a cloak, so Milo has set his sights on someone else to be his first.

Until Renner offers him private lessons in seduction...

Source:  eARC for Honest Review Courtesy of Entangled Publishing
Genre: MM Contemporary Romance
Part 4 of an ongoing series but can be read as a Standalone

Tessa Bailey knows how to light up the pages with her very sexy couples but I wasn't sure how she would do with the MM genre and let me tell ya. . .  With her first MM she did a bang up job.  Her steam factor was even higher with the MM factor.

We met Renner in the previous books of the series.  He's the uptight new boss whom has a side that we don't get to see.  We briefly saw a moment of his potential in Worked Up book #3.  Now in Wound Tight we get to see what makes Renner tick.  And we quickly learn that its Milo the self appointed personal security guard of Renner.

"What's wrong?"  Renner raised an eyebrow.  "You think I'm going to act like a teenage girl at a One Direction concert over some nipples?"


Milo Bautista is the Boston transplant to Jersey.  He first comes to Jersey as a favor to Vaughn but he quickly finds a reason to stay. . .  Renner.  However, his feelings for Renner are newish and he's very new to the gay world.  He seeks Renner's help to aid him in wooing his first crush but was it really for that or to win Renner over?

You could easily do this on your own, but apparently you're rubbing off on me because I feel . . ." He shivered.  "Obligated to guide your path.  You've turned me into gay Yoda.  It's not a good look."  Milo's lip twitched.  "Actually, I think it's your best look."


Renner has been burnt in the past so he's lives the push away first so you can't get hurt philosophy but it's starting to cost him Milo.  Now he has face his past fears if he wants any future with Milo. 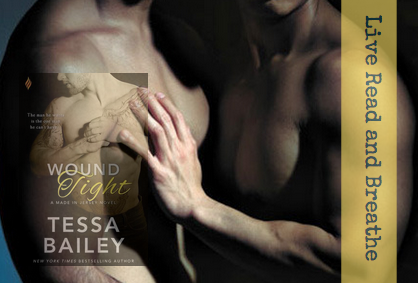 I really liked Renner and Milo together.  They were a perfect match for each other.  Well once they got over their issues.  Their chemistry was through the roof and their relationship was very heartfelt.  Even though this book is part of a series I don't feel you had to read the series to get more from these characters.  I feel Tessa has written it in a way that anyone could read it as as standalone.  I did however read the series as a whole so it's always great to see past characters.   This series has been hit and bit miss for me but I think that this one has been my favorite so far.

4 Wound up Thumbs up!

Posted by Live Read and Breathe at 20:58