All You Need by Lorelei James #bookreview #contemporaryromance #needyou @BerkleyRomance 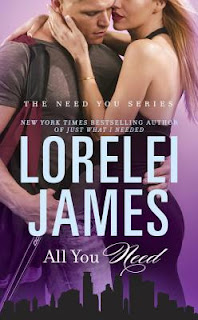 A hockey romance burns up the ice in the third sexy Need You novel from the New York Times bestselling author of the Mastered Series and the Blacktop Cowboys® Series.

PR agent Annika Lund can spin any disaster into a win. But revamping the reputation of a notorious Swedish hockey player will take every trick in her arsenal, especially when his agent insists that convincing everyone he’s no longer a playboy is top priority. And that it requires a sham relationship—with Annika playing the part of loving girlfriend.

On fire in the rink and in the bedroom, Axl Hammerquist couldn’t care less about being anyone’s golden boy. So when his agent forces him to play nice with a new publicist, he takes satisfaction in being as much of a pain as possible. But the more time he spends getting to know Annika, the more Axl starts to think that being Mr. Nice Guy might be worth it if it gets him the girl...


I LOVE the Lund family and this series,  The banter between all the characters is fantastic.

All You Need is part three in an ongoing series but could be read as a standalone.  Not only is this written by one of my favorite authors it's also a sports romance which is one of my guilty pleasures when it comes to romance books.

This time the story evolves around Annika Lund aka the 'ice princess' and Swedish hockey star Axl Hammerquis.  These two definitely did not have a love at first site meeting.  Instead they had a more of hate at first site.   However, since PR is Annika's job, plus her ever loyal qualities.  She's guilted into helping Axl when he needs better publicity.

"You scare me, Annika Lund."
"Why?"
"Because you're outrageously beautiful, extraordinarily smart, ridiculously clever, utterly devoted to your family and so fucking sexy I fear you might ruin me for all other woman."


These two start out as a PR stunt but turn into more behind closed doors.


For Axl he's still getting used to the English language even though he's quite fluent already.

"What is a douche canoe?"
"Worse than an asshat, but not as bad as a twat waffle."


These two were punny and sexy rolled up into one.


My favorite part is the banter in this series and especially with the mom and all her change of sayings.  It adds an element to the story that makes it more enjoyable.  Sometimes sports romance can be yay or nay and this one was a definite yay.  I loved Axl and Annika together and I absolutely adore this series and all the characters involved.  I can't wait for more from this series and the Lunds.