So this week even though I am a day late I decided that my book boyfriend this week will be...

Here are some of the reasons why I love him.

" PS - How did the regional competitions go? And btw, your ex is obviously a moron. LW"

He leaned closer still, his smooth cheek whispering against mine as he murmured, "Yes, you do." Struck again by his scent - clean and subtle, unlike the trendy colognes Kennedy favored which always seemed to overpower any scent I wore - I felt an impulse to bring my fingertips to his face and trail them over his freshly shaven jaw,....

"I won't ask you to give up what you want for me, Jacqueline." Lucas

"Choosing to be with you isn't a difficult decision, Jacqueline." Lucas

Quotes from Easy by Tammara Webber 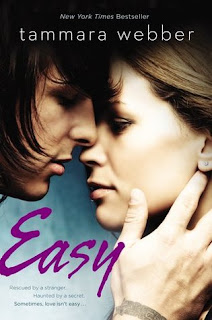 When Jacqueline follows her longtime boyfriend to the college of his choice, the last thing she expects is a breakup. After two weeks in shock, she wakes up to her new reality: she’s single, attending a state university instead of a music conservatory, ignored by her former circle of friends, stalked by her ex’s frat brother, and failing a class for the first time in her life.

Her econ professor gives her an email address for Landon, the class tutor, who shows her that she’s still the same intelligent girl she’s always been. As Jacqueline becomes interested in more from her tutor than a better grade, his teasing responses make the feeling seem mutual. There’s just one problem—their only interactions are through email.

Meanwhile, a guy in her econ class proves his worth the first night she meets him. Nothing like her popular ex or her brainy tutor, Lucas sits on the back row, sketching in a notebook and staring at her. At a downtown club, he disappears after several dances that leave her on fire. When he asks if he can sketch her, alone in her room, she agrees—hoping for more.

Then Jacqueline discovers a withheld connection between her supportive tutor and her seductive classmate, her ex comes back into the picture, and her stalker escalates his attention by spreading rumors that they’ve hooked up. Suddenly appearances are everything, and knowing who to trust is anything but easy.

Posted by Live Read and Breathe at 21:12