A DICTIONARY OF MUTUAL UNDERSTANDING by Jackie Copleton #featurestop #releaseday 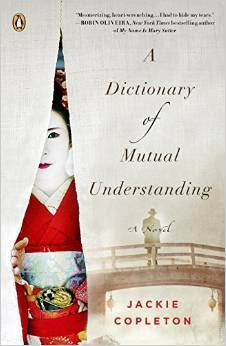 A DICTIONARY
OF MUTUAL UNDERSTANDING
A Novel
Jackie Copleton

Advance Praise for A Dictionary of Mutual Understanding:

“Perfectly paced hints and reveals...Though Amaterasu’s current life is defined by the bombing
of Nagasaki, the novel is more than just a war story...A fully drawn portrait of a city and a life,
this novel will hold appeal for history buffs, lovers of literary fiction, and readers of
high-drama romance.” —Kirkus Reviews

“Astonishingly accomplished…A gripping love story and family dynamic is woven seamlessly with graphic descriptions of the aftermath of the bomb and the historical and cultural changes sweeping Japan…While this is an often heart-breaking portrait of a mother’s love…it is also a meticulously researched history of Japan. The graceful style and clarity of [Copleton’s] writing makes this an addictive read…this novel is a must.”—Scottish Daily Mail

“Full of delicate imagery drawing on Japanese nature and culture, this is a rich, romantic story, brimming with restrained emotion—with a twist that will take your breath away. Superb.”
—Daily Mirror (UK)

“An absolute must. Gripping from the first page, you’ll not want to put it down…
this is a superb literary launch.” —Marie Claire (UK)
In the tradition of Memoirs of a Geisha and The Piano Teacher, A DICTIONARY OF MUTUAL UNDERSTANDING (A Penguin Paperback Original; On-sale: December 1, 2015; 978-0-143-12825-0; $16.00) by Jackie Copleton is a heart-wrenching debut novel set against the 1945 atomic bombing of Nagasaki, rich with intimate betrayals, family secrets, and a shocking love affair. Copleton deftly weaves a narrative spanning decades, moving seamlessly between Philadelphia forty years after World War II, Nagasaki during the war and in the years leading up to it, and the Japanese hostess bars of early 20th century Nagasaki.
When Amaterasu Takahashi opens the door of her Philadelphia home to a badly scarred man claiming to be her grandson, Hideo, she doesn’t believe him. Her grandson and her daughter, Yuko, perished nearly forty years ago during the bombing of Nagasaki. Ama is forced to confront her memories of the years before the war: of the daughter she tried too hard to protect and the love affair that would drive them apart, and even farther back, to the long, sake-pouring nights at a hostess bar where she first learned that a soft heart was a dangerous thing. She must decide whether the man calling himself Hideo is really her long-lost grandson. Once you’ve become adept at lying to others and yourself, can you still recognize the truth? Will Ama allow herself to believe in a miracle?
For many, Hiroshima and Nagasaki are distant place names learned from a history book in a sterile classroom. In A DICTIONARY OF MUTUAL UNDERSTANDING, Jackie Copleton brings to light a rarely examined era, delivering an impassioned story of family, loyalty, and love that allows readers in the Western world to confront the devastating effects of “Fat Man” on the people of Nagasaki—its human toll, and the lasting emotional and cultural impact. In the current nuclear climate this novel serves as an elegant reminder of our shameful history, but also of the vulnerability of survival and the real meaning of peace.
ABOUT THE AUTHOR
Jackie Copleton spent three years teaching English in Nagasaki and Sapporo. A journalist, she now lives with her husband in Glasgow, Scotland.
www.jackiecopleton.com | Twitter: @JackieCopleton | www.facebook.com/JackieCopleton
Feel free to download and use the Book Club Kit, which includes delicious Japanese recipes, a Spotify playlist, and suggested discussion topics.
Posted by Live Read and Breathe at 00:00