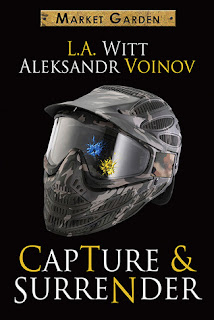 by L.A. Witt (Goodreads Author), Aleksandr Voinov (Goodreads Author)
Ever since his partner died, Frank has resigned himself to staying single. He wards off the loneliness by spending time with friends on the paintball field and running his high-end brothel, the Market Garden.

After one of his most lucrative rentboys quits, Frank is thrilled when a gorgeous replacement walks through the door. A former US soldier, Stefan is hot, bold, and perfect for the Market Garden’s clientele, especially those with a thing for camouflage and drill sergeants. He's perfect for Frank, too, except Frank has a rule about not getting involved with his own rentboys.

Finally we get to find out how the Market Garden came to be.

Frank who we have seen behind the scenes a bit in the other Market Gardens finally makes it to the forefront with his story.

After Frank loses his best rent boy to love he happens to come across Stefan who fills the void in his business as well as his heart.

Stefan is instantly drawn to Frank but Frank has put up boundaries personally and professionally.

Finally the need is strong enough to break down the boundaries but there was a reason for them.

Once Frank tells the truth behind his walls it is up to Stefan to chose if their connection is worth the risks.

This story has the hot factor like the other stories in the series but it also has a more emotional story to go a long as well.


For Franks and Stefan they get their second chance at love which is beautiful and powerful.