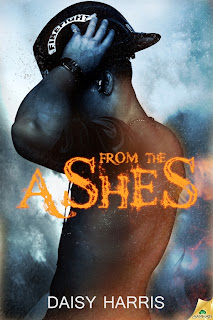 From the Ashes
by Daisy Harris

When an accident burns down Jesse’s apartment, he’s left broke and homeless, with a giant dog and a college schedule he can’t afford to maintain. And no family who’s willing to take him in.

Lucky for him, a sexy fireman offers him a place to stay. The drawback? The fireman’s big Latino family lives next door, and they don’t know their son is gay.

Tomas’s parents made their way in America with hard work and by accepting help when it was offered, so he won’t let Jesse drop out of school just so he can afford a place to live. Besides, Jesse’s the perfect roommate—funny, sweet and breathtakingly cute. He climbs into Tomas’s bed and tugs at his heart. Until Jesse starts pushing for more.

Their passion enflames their bodies but threatens to crush Tomas’s family. Tomas is willing to fight for Jesse, but after losing everything, Jesse isn’t sure he can bear to risk his one remaining possession—his heart.

“You take the bed.” Tomas stroked the top of Jesse’s foot. The connection of skin made him shiver. “I got it last night.” He wanted to kiss Jesse’s cheek. So he did. Then he got up and did the dishes.

Jesse gave him a small but cheeky wink. “You’re only giving me the bed because the sheets are gross.”

Tomas laughed. He’d forgotten about that. “I’ll put some new ones on for you, fancy boy.”

“I can do it.” Jesse went to the closet for fresh sheets, but folded out the loveseat to make that bed first. The scene felt warm and homey, the way Tomas felt with Jesse every night.

Jesse cut him off. “Y’know...” He looked up, holding a pillow half-stuffed into a pillowcase. His hazel eyes were honest and open. “You don’t have to be perfect.”

Tomas’s chest hurt, as if Jesse had shot him straight through. His heart was bleeding, but that was okay, because it bled for the skinny, pretty boy standing in the middle of his living room. “Jess—”

“You don’t have to be perfect.” Jesse shook his head. He swallowed hard, but then smiled. “I still like you.”

“Fuck, Jess.” Tomas blinked back tears. He couldn’t tell if he was happy or sad, only that Jesse had every part of him. “I like you so much.”

Jesse nodded. He smiled down at what he was doing and finished stuffing the pillowcase. “I know.” 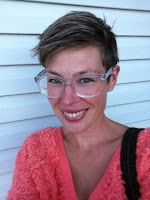 Birkenstock-wearing glamour girl and mother of two by immaculate conception, Daisy Harris still isn't sure if she writes erotica. Her romances start out innocently enough. However, her characters behave like complete sluts. Much to Miss Harris's dismay the sex tends to get completely out of hand.

She writes about fantastical creatures and about young men getting their freak on, and she's never missed an episode of The Walking Dead.

Want to learn more about new releases, general news and my latest inappropriate boy band crush? Sign up for my newsletter here: http://eepurl.com/b96xX

My filthy Tumblr feed can be found at: http://www.tumblr.com/blog/holsumcollege

Daisy will be awarding a $20 gift card to Starbucks to a randomly drawn commenter during the tour. 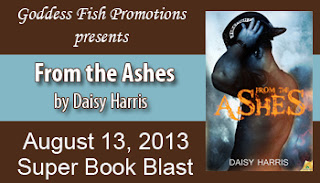 So as soon as I saw this opportunity to be part of this tour I jumped on it as I have loved Daisy Harris after reading her Men of Holsum College Series.

From Ashes is about love when you least expect and finding out love is worth some consequences.

For Jesse he thinks he has just lost everything in a house fire but in reality he got so much more.

While Jesse is dealing with the aftermath of the fire, he finds himself in the arms of Tomas a Latino hottie/fire fighter who is still in the closet and being the new parent of a Bull Mastiff named Chardonnay. 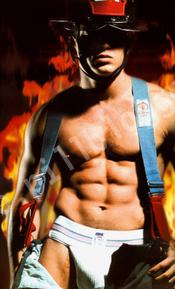 When Jesse has no where to turn Tomas convinces him to stay with him which also just happens to be at his parents place.

For Tomas he is tortured with what is right and what is wrong and a fine line of need and not being truly gay.  After meeting Jesse, Tomas is starting to question his decisions and finds Jesse is worth the wrath of judgement from his family and friends.

Sweet and loving story with passion and risk.