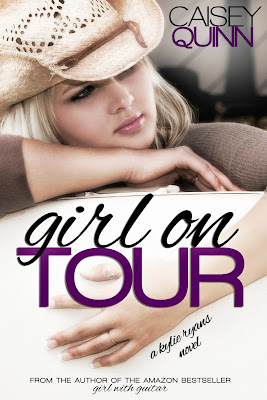 Release Event
Title: Girl on Tour: Kylie Ryans #2
Author: Caisey Quinn
Release date: August 27, 2013
Genre: Contemporary Romance
Age Group: New Adult
Event organized by: AToMR Tours; http://atomrbookblogtours.com
Links to the book:
Goodreads - http://www.goodreads.com/book/show/18043961-girl-on-tour
Amazon
Barnes & Noble
Book Description:
An up and comer trying to make a name for herself...
KYLIE never expected to be stuck on a tour bus with a pampered princess and her boyfriend’s ex.
A troubled artist struggling to hold onto his career...
TRACE thought he was finally getting to do things his way. Until the label added co-headliner Gretchen Gibson, the only person in country music with more issues than him, to his No Apologies tour.
Surrounded by tabloid rumors and people they can't trust, Kylie and Trace need each other more than ever. But the choices they make will change everything.
Because chasing your dreams and following your heart don’t always lead you to the same place…

Caisey Quinn lives in Birmingham, Alabama with her husband, daughter, and other assorted animals. She is the author of several New Adult Romance novels featuring country girls finding love in unexpected places. She is currently working on Girl in Love, the third and final book in the Kylie Ryans series. You can find her online at www.caiseyquinnwrites.com. 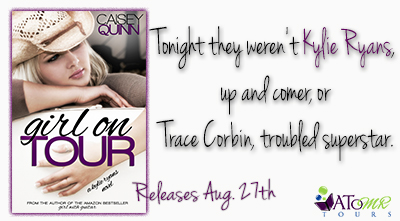 “Behave yourself while I’m gone, Mr. Corbin,” she said, playfully smacking him square in the chest even though she was completely serious. Please don’t drink, she almost added. But she’d seen the dark cloud that had threatened to roll over his features when she asked if he’d be okay.
“I’ll try. Long as you promise to come back to me safe and sound, pretty girl,” he said, slapping her on the ass as she turned to make her way up the steps of the bus.
“Always.” She threw him one last wink before climbing the steps. A lady that looked old enough to be her grandmother sat in the driver’s seat staring straight ahead. Kylie greeted her and got nothing but a slight head tilt in response. She missed Carl, Trace’s friendly driver, already. Every step she took was like walking deeper into quicksand. Her legs seemed to be completely against the idea of walking away from Trace Corbin.
Her eyes began to tear up and she couldn’t even see the cool décor inside the bus through the pools of moisture. Screw this. She dumped her suitcase in the aisle and sprinted back to the door of the bus.
“Hey,” she called out to his retreating figure. Dang, he looked good from the back. Hate to see you go but I love to watch you leave.
“Hey yourself,” he answered as he turned to face her.
She didn’t think. Didn’t worry that she might be getting in too deep, moving too fast, or throwing more at him than he could handle. She just did what she was best at. Felt first. Acted on impulse. Once he was close enough, she launched herself into his arms and slammed her mouth down on his.
He caught her, just like she knew he would. His hands gripped her tightly as she wrapped her legs around his waist. His mouth said he was just as hungry for her as she was for him. She deepened the kiss as far as possible, lashing her tongue against his until it ached. When the world began to spin, either because she was falling hopelessly in love or because her brain was seriously deprived of oxygen, she finally pulled back.
Panting, she looked him in the eyes. “I’m going to miss you more than I can even stand. I needed a better goodbye than that.”
Trace didn’t disappoint. He backed her against the side of the bus, still holding her to him in mid-air. Her mind flashed to their escapade in the barn earlier and she felt the warmth spreading through her core. He ravished her mouth before she could even smile at the memory. When neither of them could take any more, he set her down gently and pulled her in close against his chest. “I’m going to miss you, too, Kylie Lou. So damn much.”