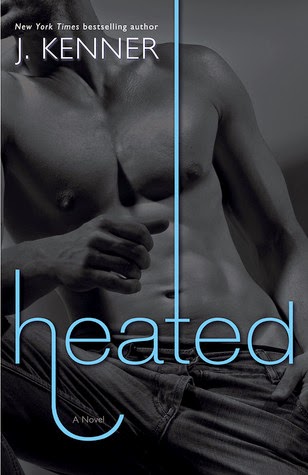 by J. Kenner (Goodreads Author)
I knew better than to risk my heart.
But fierce passion comes at a high price.

I grew up believing in right and wrong, good and evil, black and white. I knew better than to trust. And then I met Tyler Sharp.

Bold, charming, and dangerously sexy, Tyler always gets what he wants. But his smile can be deceiving, his dealings sordid, his ambitions ruthless. I thought I was the one woman strong enough to resist him, but our need for each other was too urgent to deny.

One look and I was in trouble. One touch and I was hooked. One night and I became his.

And now that I’ve fallen, there’s no going back.

I fell in love with J. Kenner's writing with the Stark Trilogy so I was so excited with this series.  I started with Wanted but was left with 'meh' but I am a loyal reader so I gave Heated a try but sadly I was left with another 'meh'.

"I've gone with a lot of women, Sloane, but I've only fallen in love with one. I want to make this work."

The criminal and the cop.  There was so much potential with this but for Tyler and Sloane things happened soooo fast that their love came off as phony.  It always chokes me when the story has so much potential and can be so great but the chemistry and/or connection isn't there leaving it flat and wanting more.

I still do love J. Kenner but sadly so far this series has not wowed me at all. My favorite part of this book was the Take me novella (Stark) at the end of the book.