One Night with a Quarterback by Jeanette Murray - #review 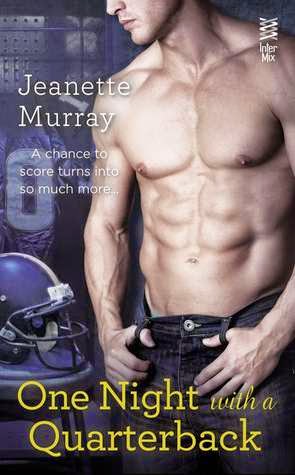 One Night with a Quarterback (The Santa Fe Bobcats #1)

She’s daddy’s little girl…or she would have been, had he known she existed. Cassie Wainwright thought her father—head coach of the Santa Fe Bobcats—ignored her purposefully. Come to find out, he had no clue she’d ever been born.

Now Cassie is determined to meet the man who’s always been missing from her life. Her mother warns her, being the long-lost daughter of a well-known NFL coach won’t be easy, but Cassie’s determined to stick it out. And before her life turns upside down, she wants one more night of fun.

Starting quarterback for the Santa Fe Bobcats, Trey Owens is tired of being in the limelight. Lucky for him, the beautiful brunette he meets at the club isn’t a local. She has no idea who he is…and she’s down to party.

My One Night with a Quarterback Review ...

Sometimes I think I'm turning into the whiny goldilocks of reviewing trying to find the 'just right' book.  Lately with reading I have felt like all of the themes have been similar and repetitive with this book I was pleasantly surprised with not finding a whiny insecure heroine.  It held all the elements that I liked in a book and the emotional theme was refreshing but sadly I have to say that I unfortunately didn't love it.  I liked it but I didn't fall in love with Cassie and Trey.

Cassie just finds out about her dad as an adult.  She goes to Sante Fe to get to know him better.  Right before she meets her dad she has one last 'kick at the can' until her life changes.  After she meets her dad he treats her like a child and puts strict rules on her with NO BOYS even though she is an ADULT.  The biggest rule is also to not date his football players, unbeknownst to Cassie that her last fling - Trey also happens to play for her dad's Football team.

Cassie had some strengths and wasn't a weak girl but she did try to follow her dad's bullshit rules.  Her dad starts off as a douchebag, her new step mom is a raging bitch and needs to be bitch slapped.  Here sisters have good and bad moments.   Trey was good until one loser moment which felt like it came out of nowhere and almost cost him everything.  Argh! I wanted to like this so much more.  I liked so many elements but there was something that just didn't connect for me.

In the end it was a sweet sports romance with lots of potential.  I will be continuing with book 2 to see if it picks up that oomph that I'm craving if it doesn't I have to put this series to rest which saddens me because I am such a sucker for sports romances.

Posted by Live Read and Breathe at 13:00