Overwhelmed by You by Nashoda Rose Blog Tour- #giveaway & #review

Love is ugly and secrets will destroy you.

I don’t beg.
I don’t cry.
And I don’t give second chances.
Ream, the lead guitarist of the rock band Tear Asunder, deserves a gold medal for best dick move ever when he ran the moment he discovered my secret after two days of hot sex. Then he brings some chick to my coming home party from the hospital—after being shot.
I hate him.
Until …
Ream’s six foot two frame unfolds out of the car after being gone on tour for eight months. I stared. And in my defense, any girl would stare. It would almost be rude not to because Ream was the type of guy who stood out. Not because he was loud and obnoxious. No, it was because he was the complete opposite. Subtle and dangerously quiet. If he spoke, you’d better hope he liked you because otherwise you’d be falling at his feet begging for mercy. Except me … I don’t beg—ever.
But when our eyes locked, it was Ream’s steady confidence that had my nerves shooting off like jet sprinklers.
Then…
Ream told me he didn’t need a second chance because he was still working on his first.

Sex is ugly. It’s using someone for your own narcissistic pleasure. I did it and I hated it—until her. She was unfuckinexpected. Then I had to wreck our beginning with my screwed up past.
I don’t deserve her, but I’m selfish and I’m taking her anyway. This is who I am and it’s too late to change me.

*Warning contains violence, sexual content, and coarse language. Mature audiences 18+*
A contemporary romance with lots of angst and a taste of dark.

Nashoda Rose lives in Toronto with her assortment of pets. She writes contemporary romance with a splash of darkness, or maybe it’s a tidal wave. Her novella "With You" is the first in the Tear Asunder series, followed by the novel "Torn from You" and "Overwhelmed by You". When she isn’t writing, she can be found sitting in a field reading with her dog at her side while her horses graze nearby. She loves interacting with her readers on Facebook and chatting about her addiction—books.

My Overwhelmed by You Review ...

After reading Torn From You, I was dying to find out where it went wrong for Kat and Ream.

I love the way Nashoda writes a story and sucks you in with the darkness and angst while still laced with humor happiness and hope. 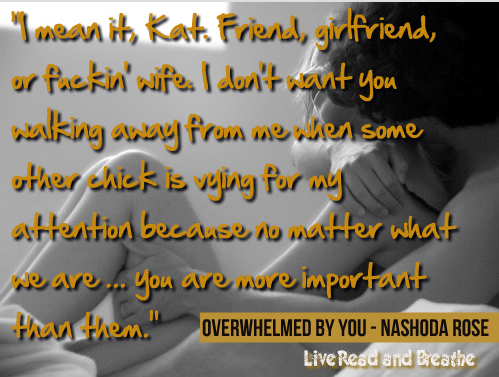 Secrets can destroy.  For Kat and Ream all they really know is secrets.  It is what defines them and it also could be what destroys them.

Once Ream gets over his shit he fights for what he wants, even though Kat is fighting the process.  Ream ends up being the knight on a dark horse once he is all in. 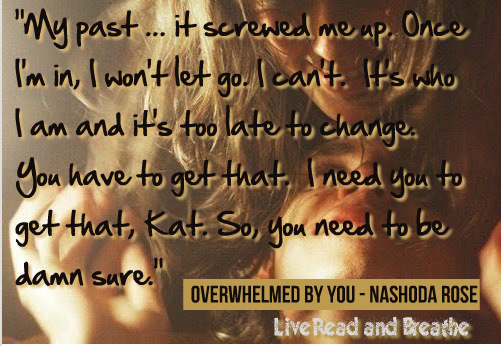 The journey for Kat and Ream is a troublesome journey with a lot of pain.  But sometimes with pain its pleasure. With these two it is a fine line. 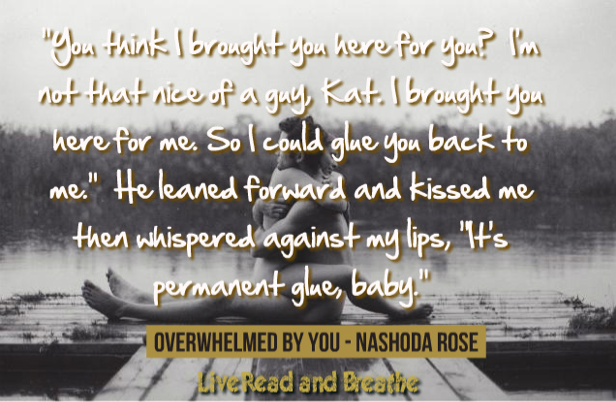 As things are starting to go swimmingly then ...

At this point we don't know what is the truth or what is lies, but all you are left with is the angst of NOOOOOOO this can not be happening then, once the secrets come out all hell breaks loose.

The tangled web starts to get unraveled in all directions with so many twists and surprising turns but no matter what within all that darkness is the love.  The love Ream had for his family. The love he has for Kat.  The love Kat has for Ream demons and all. The love and hope for a future in a dark world. 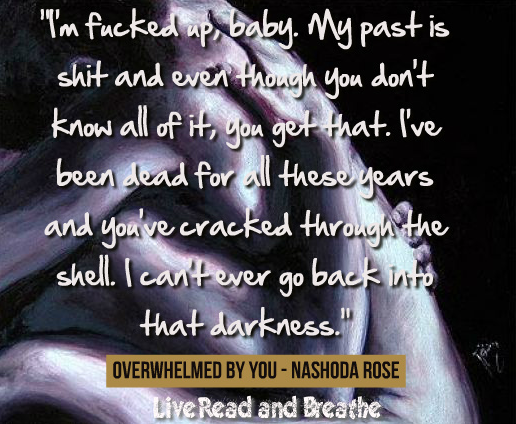 I loved this book and I flippin' love this series.  Even though it is on the darker side there is so much love and hope that it balances out.  I can not wait for more from this series and Nashoda.