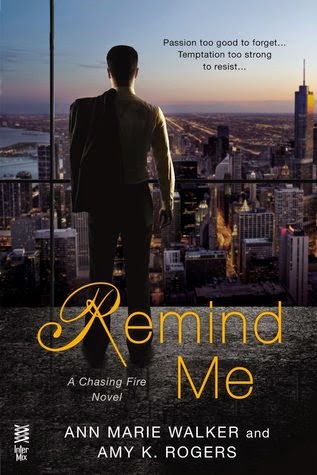 As heiress to a media empire Alessandra Sinclair was raised to put family obligations first. But everything changes the night her first love walks back into her life and turns her whole world upside down. Haunted by the memories of a secret romance with a boy from the wrong side of the tracks, she can't seem to get Hudson Chase out of her mind. Once again torn between two worlds, Allie must decide how much she’s willing to risk to have the love she’s always longed for.

Ten years is a long time to wait, but billionaire Hudson Chase didn’t become CEO of one of the country’s fastest growing companies by giving up on what he wants. Now that he’s got Allie in his sights again, he’s determined to make her regret breaking his heart. And this time, he’s going to make damn sure he’s not so easy to forget.

Includes a preview of Release Me, book two of the Chasing Fire trilogy.

This book was hard to read for me sadly because it felt like a bundle of mish mash ideas from others books I have already read.   I felt like I had already been there down that when reading this book.  There was a billionaire, an heiress, some kink.  I could go on.  The billionaire Hudson Chase felt like Christen Grey, Gideon Cross combined with James Cavendish, Damien Stark, Jesse Ward, and Lucien Knight.  There were elements of these men but nothing felt original about this series.  The Heiress felt like a poor representation of all the counter parts to these men.

Even though this storyline has been done a bazillion times it had potential but it fell flat for me.  It was just too similar to other books without its own identity that it made it hard to like or continue.  If you have never read any of these books with the men from above then you might like it.  If you have read and loved any stories of the above men then you will most likely not appreciate this book.  This may be a bit harsh but it felt like it was a spoof on other books and I'm pretty sure that was not the goal of the book.  :(

The story was about Alessandra Sinclair who is a heiress and a new billionaire Hudson Chase.  When they were teens they fell in love but Hudson was from the wrong side of the tracks.  Now ten years later with a big teenage miscommunication and a grudge to grind Hudson has to prove himself to the world.

Suddenly the two are reunited and yada yada yada, blah blah they get back together.  But Alessandra has a fiance and her parents still dictate her life.  With one last surge she finally grows a spine to go after what she wants and not what her parents want but she's too late.  Now her world is falling apart and her new love foundation is blown up again so what will she do?????  We all know what she will do so the cliffhanger fell flat as well for me.  I have to admit it's a hard pill to swallow when a book falls so flat for me that I will never get those hours back where I could have been sleeping or reading another book.

Ugh! Sad to say but 2 Jacob Two Two Thumbs up!