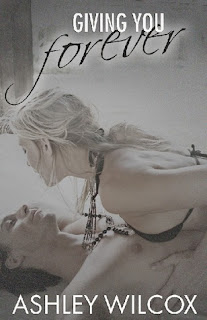 Giving You Forever (The Forever Series #4)

by Ashley Wilcox (Goodreads Author)
From the moment Nolan Pratt walked into Alexa Arnold’s life everything was forever changed. After a year of dating, the ring was on her finger, the house was purchased, and life was heading down Pleasantville Lane. Everything was perfect.

Or so they thought.

With help from his parent’s inheritance, Nolan takes on a new business adventure, utilizing all his free time. What was once their life- carefree with minimal responsibilities, is no more. When Alexa starts to feel the pressure from school, wedding planning, and lack of help from Nolan, exhaustion kicks in and feelings get hurt, testing the strength of their relationship. But, if there is one thing that Nolan will never compromise, it’s Alexa’s happiness. There’s nothing Nolan Pratt won’t do to make sure Alexa is well taken care of, loved, and happy.

When Nolan’s past resurfaces- a past that Alexa didn’t know existed- will it all be too much? Will Nolan’s devotion to Alexa’s happiness cost him their relationship and lose him the only thing that has ever mattered in his life? Or will Nolan discover that his past doesn’t determine his future and he is worth the happiness he doesn’t think he deserves?

I was so looking forward to more Nolan and Alexa but I had a turbulent beginning with this story but smoother sailing towards the end.

With Alexa and Nolan their relationship blossomed fast in Planning on Forever with not too much stress and a quick engagement in Giving you Forever we start to see the meat and potatoes of Alexa and Nolan because after three years Alexa realizes that she really doesn't know Nolan that well. WHAT?  (After three years you don't know anything from his past?)

The first 50% of the book felt like this SEX, a wee bit of story line,  SEX, small story line, SEX, SEX, a bit more story line, SEX... you are getting my gist of this. Don't get me wrong I normally am a big fan of loads of sex but the first part felt like way too much sex (and the same formula of sex almost every time) and little substance.

At the 50% line substance started to take over and you get to see the true side of Nolan and how much guilt and loss that he carries with him every day.  With the love and support of Alexa he is able to let go, forgive and finally move forward so he can truly free to love and be happy.

Nolan and Alexa are a sweet couple and Nolan is a bit over the top with his love but I don't mind as he could smother me any day.

I do like this series and I have liked some of the books more than others but I am hooked and want to find out what happens next.

This book was cute and had some good and bad elements but its one of those books and series that are quick and sweet with a lotta smut thrown in.

Because of the bumpy start for me will give it...