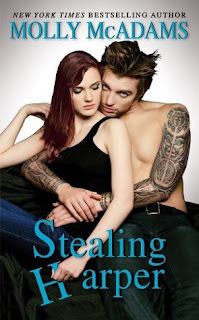 by Molly McAdams (Goodreads Author)
Chase Grayson has never been interested in having a relationship that lasts longer than it takes for him and his date to get dressed again. But then he stumbles into a gray-eyed girl whose innocence pours off her, and everything changes. From the minute Harper opens her mouth to let him know just how much he disgusts her, he's hooked.

But a princess deserves a Prince Charming who can make her dreams come true. Not a guy who can turn her life into a nightmare.

All good intentions go out the window when Harper starts to fall for the guy Chase has come to view as a brother. He wanted to protect her by keeping her away, but he can’t stand to see her with anyone else, and he’ll do anything to make her his. But when it comes down to Harper choosing between the two, will Chase have the strength to step back from the girl who has become his whole world if it means she’ll be happy?

Lines will be crossed. Friendships will be put to the test. And hearts will be shattered

I think I must have something mentally wrong with me to put my self through this known heart ache again. I knew, I KNEW how it was going to end and I still read it and yep it gutted me just as bad as the first time I went through it.

As tough as it was I am glad I re-went through this journey as I learned a few new things and was reminded of parts I forgot.  Being from Chase's POV changed the story and helped clarify other parts.

Chases's love for Harper was just as beautiful from his POV.  Probably even more so.

"You're such an ass, Chase. Why, can't you just leave him alone?" "Because he's with my entire world."

About what a manipulative crazy bitch Trish was.

Holy Shit I wanted to hurt her for what she did.

On a side note I would love to see a new story where Trish gets what is coming for her. Payback is a bitch. Maybe it could be a story about Marissa and Brian and their trials and tribulations with a little of Trish revenge thrown in. Hmmm who else is with me on this?

1) I lost respect in Harper.  She was so wishy washy and was always worried about her feelings and Brandon's but never put Chase's feelings in the equation.


She expected a lot out of Chase but he was not given a lot of knowledge of what she expected from him.

"I didn't want you to avoid me like the plague, I wanted you to fight for me. To show me that you loved me like you said you did."


WTF Harper!!!!!! Chase has done nothing but show her he loved her. Ok at the first he pushed her away but after that he was all about Harper. How did she not see that. Grrrrrr!

2) With Brandon - You get to see a different side of him that I was better with him being with Harper even though I will forever be a die hard Team Chase fan.

Now let's talk about the ending. Like I said I knew what was coming but it still ripped out my heart.