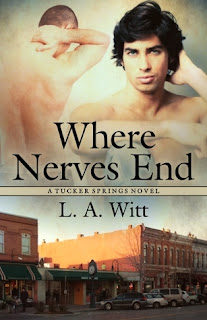 Jason Davis can handle a breakup. And an overwhelming mortgage. And a struggling business. And the excruciating pain that keeps him up at night thanks to a shoulder injury. Handling all of it at once? Not so much. When his shoulder finally pushes him to a breaking point, he takes a friend’s advice and gives acupuncture a try.

Michael Whitman is a single dad struggling to make ends meet. When a mutual friend refers a patient, and that patient suggests a roommate arrangement to alleviate their respective financial strains, Michael jumps at the opportunity.

Living together would be easy if Jason wasn’t so damned attracted to Michael. Good thing Michael’s straight, or the temptation might just be too much.

So I have totally read this series out of order but it didn't effect the reading journey at all. I was so happy to finally get to read about Jase as he is an integral part in the other books.

I don't know why but I am a big fan of the thought to be straight to gay themes.  I don't know if it is the growth of that person finally admitting to who they truly are or the connection that finally opens them up to reality but for whatever reason it works.

Jason was struggling personally, professionally and physically which leads him to Michael the acupuncturist who can help him with his physical pain.

With this meeting they both realize that they could use financial help to ease their burdens and become roommates. This sounds like a good idea at the time with Michael being straight and Jason having an unrealistic crush on him but the more the get to know each other the more they like about each other.

This becomes a problem because Michael is straight....or is he?  Once they finally decide to cross the line they relationship is brought to a new level.

Jase and Michael have a great connection and have to face coming out and the effect it can have on them and their families.

I am such a big fan of the Tucker Springs novels so it was great to see all of the characters from the beginning. 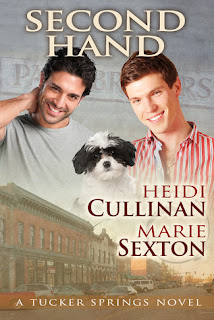 by Marie Sexton (Goodreads Author), Heidi Cullinan (Goodreads Author)
Paul Hannon moved to Tucker Springs for his girlfriend, but she's left him with a house he can't afford and a pantry full of useless gadgets. All Paul wants is to get back to normal, even if he's not sure what that is anymore. When he wanders into Tucker Pawn for a gift to win her back, he meets El Rozal, pawn shop owner and all-around cynic. El Rozal doesn't do relationships, especially not with clueless straight boys still pining for their ex. El may make his living dealing in castoffs, but that doesn't apply to men. Still, when Paul starts clearing out his old life, pawning kitchen equipment he never wanted in the first place, El is drawn to Paul in spite of himself. Paul and El have nothing in common except a past full of disappointments. There's no reason to believe the two of them could fit, but in El's line of work, one man's junk is another man's treasure. When it comes to love, El and Paul may learn that secondhand doesn't mean second best. This title is part of the Tucker Springs universe.

I am a huge fan of the Tucker Springs novel. I have completely read them out of order but so far I have adored each one. I fell they all have powerful messages and strong bonds between partners.

In this book we meet Emmanuel (El) who holds up a cage around his heart because he fears he will get hurt seeing the pain and suffering of everyone who is near and dear to him with no HEA for them so why would he believe that it could happen to him.

Now we meet Paul who is so adorably clueless about his own reality.  He is so lost on the concept of trying to remain normal. But what does normal really mean.  Not until his girlfriend leaves and he meets El does he start to get a new picture of a new normal.

If only it could be that simple but then the fear of the unknown and disappointment of others does Paul still hold on to false notions of the what if.

But true love and being true to your self is a powerful thing and that is what wins in the end with Paul and El.

It is so great to intermingle with the folks of tucker springs and see love blossom everywhere where we least expect it. 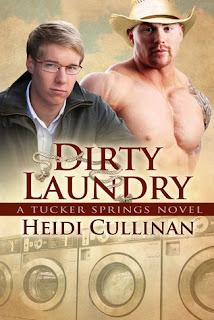 by Heidi Cullinan (Goodreads Author)
The course of true love doesn’t always run clean. But sometimes getting dirty is half the fun.

Entomology grad student Adam Ellery meets Denver Rogers, a muscle-bound hunk of sexy, when Denver effortlessly dispatches the drunken frat boys harassing Adam at the Tucker Springs laundromat. Thanking him turns into flirting, and then, much to Adam’s delight, hot sex over the laundry table.

Though Denver’s job as a bouncer at a gay bar means he gets his pick of geek-sexy college twinks, he can’t get Adam out of his head. Adam seems to need the same rough play Denver does, and it’s damn hard to say no to such a perfect fit.

Trouble is, Adam isn’t just shy: he has obsessive compulsive disorder and clinical anxiety, conditions which have ruined past relationships. And while Denver might be able to bench-press a pile of grad students, he comes from a history of abuse and is terrified of getting his GED. Neither Denver nor Adam want to face their dirty laundry, but to stay together, they’re going to have to come clean.

This title is part of the Tucker Springs universe.

I can't get enough of the men in Tucker Springs.  They are all great men with real issues and who are desperate for love and belonging.  In this one it deals with the tougher topic of mental illness and in this case OCD, anxiety and learning disabilities.

Adam has a heavy weight of reality in him with being strapped with OCD and anxiety and add an asshole of an ex who bullies him which causes him to be hard on himself.

Denver is huge strong sweet man who has is own demons and insecurities.

Denver saves Adam at the laundromat and instantly the are drawn to one another. Visually you wouldn't put the two of them together but together is where they both find the strength to live and love.

I love Adam and Denver together I think they are a beautiful match and I can't wait for more of the boys from Tucker Springs.

Lauren
Posted by Live Read and Breathe at 20:42