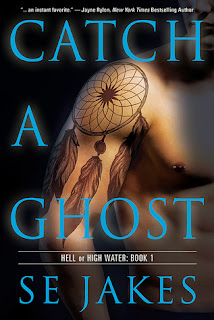 by S.E. Jakes (Goodreads Author)
Everyone knows that Prophet—former Navy SEAL, former CIA spook, full-time pain in the ass—works alone and thinks only about the trouble he can cause. But his boss, Phil Butler of Extreme Escapes, LTD., has just assigned Proph not only a new partner but also a case haunted by ghosts from Proph’s past. Suddenly, he’s got to confront them both head on.

Tom Boudreaux—failed FBI agent, failed sheriff, full time believer in bad luck—is wondering why the head of a private contracting firm has hunted him down to offer him a job. Still he's determined to succeed this time, despite being partnered with Prophet, EE, LTD’s most successful, lethal, and annoying operative, and even though the case is also resurrecting his own painful past.

Together, Prophet and Tom must find a way to take down killers in the dangerous world of underground cage matches, while fighting their own dangerous attraction. And when they find themselves caught in the crossfire, these two loners are forced to trust each other and work together to escape their ghosts . . . or pay the price.

Well I was in the moody for something steamy and that is what I got with two very hot, aggressive alpha males.

Prophet the man with many haunting secrets but always has everyone's back.


Tom the man who thinks he is cursed and scared to partner in fear of losing them.


Both are thrown together as partners to solve a crime but this partnership got taken to a whole new level.

"Good, Did I fuck the fight out of you?" "Never. That doesn't mean you shouldn't stop trying," he murmured sleepily. "You're in so much goddamned trouble, Tommy." "Tell me something I don't know."


Together they are like oil and water but they also fill a deep need in one another. This creates vulnerabilities so it is easier to push each other way while hurting one another.

They thought they could just leave it as sex but it pushed them to far apart and Prophet is left doing what he always does but keep his secrets close and use sex as a shield.

Where Tom wants Prophet more than anything but for his protection makes a choice that could ruin everything and then we are left hanging for the next book to see what happens.

Does Prophet go to Cillian instead of Tom? Do Tom and Prophet find their way back to one another?
So many questions left unanswered but I can't wait to find out what happens next in Long Time Gone October 28th.