Three ago on Sept. 6 the fabulous Elizabeth Reyes put out her first book and since then she has created many more hot guys with big hearts and beautiful stories.  From Sept. 6 to the 17th is everything Elizabeth Reyes.  Look for many different blogs to find different posts and reviews. Enjoy!! 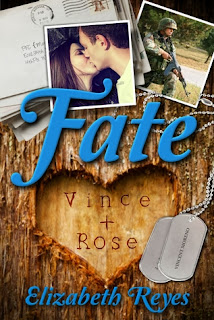 Book Description:
You can find each book description on her Goodreads page - http://www.goodreads.com/author/list/499602.Elizabeth_Reyes

About the Author
I write because I must. It's not a choice or a pastime, it's an unyielding calling and my passion."
~Elizabeth Reyes~
Elizabeth continues to answer to her calling on a daily basis. Since releasing her debut novel Forever Mine (Moreno Brothers #1) in 2010 she has now published 10* novels total and fast at work on the next. The excitement her Moreno Brothers, 5th Street, and Fate series have garnered have far exceeded her wildest dreams. It is with as much excitement that she'll continue to put out books related to these series as well as introduce brand new ones very soon.
Author social media:
Keep up with all her upcoming books/events/signings by visiting her website.
www.ElizabethReyes.com
Also come join the fun by visiting and liking her fan page on Facebook https://www.facebook.com/pages/Elizabeth-Reyes/278724885527554

Additional places to find out more about Elizabeth Reye’s books:
Link to prologue of Abel. Feel free to copy paste scene if you prefer.
Moreno Brothers Page on my blog with LOTS of excerpts and extras.
5th Street page on the author’s blog. Lots of excerpts and teasers of each book in series.

FACTS ABOUT THE MORENO BROTHERS SERIES
By Elizabeth Reyes
·      I started writing Forever Mine in the tenth grade. The first seven or so chapters were put away into a drawer for many years. I finally found it one day and decided I needed to finish it.
·      The Moreno Brothers was never going to be a five-book series. In fact, originally it wasn't going to be a series at all. I was just writing a love story about a high school senior who had two brothers and several friends who falls hard for the new girl in school. One story only.
·      When I finally finished Forever Mine the first time, it was about ten chapters shorter than the final everyone has read. After going back and finishing it, I put it away again because something about the ending just wasn't doing it for me. I pulled it out again two years later and rewrote the ending.  During this two-year hiatus, I did take it out and tweak here and there so the whole gang was in my head all the time. But then I sat down finalized the ending. Only then, when it was truly done, did I feel completely depressed because I missed my characters. That was when I decided there had to be more.
·      When I decided there would be more, it was The Moreno Brothers for a reason. I was only going to write the stories of the three brothers, until Sofia and Eric's story started to come to me as all my new stories come to me—relentlessly, at night, and when I’m trying to sleep.
·      Sweet Sofie was supposed to be a 30-40k word short novella. This was when I found out I'm incapable of writing anything short. Consequently I've always said I was going to write Moreno Brothers’ holiday novellas, but I'm afraid to even start because I'm certain they will turn into full-length novels!
·      Romero's story was never supposed to see the light of day. But I tell you once my readers plant the seed the story takes on a life of its own. His story came to me slowly and then just started to snowball and I had to write it. His by far has been the one I was most nervous about putting out there, especially since he is so different from his more proper counterparts in the series.
·      I've often mentioned that my muse takes over all the time. This is probably hard to believe, but some of the twists and sudden changes in the plots take me by as much surprise as they do my readers. One perfect example of when my thoughts actually made it into the narrative is when Angel is sitting in his car watching Sarah and the coach talking in the bleachers. Try as he might to stay calm about it he finally starts walking toward them. The very next line after that happens is "He had no idea what he was going to say or do, but even the voice in his head couldn’t stop him." Okay, that voice? That was me! I sat up straight as I often do when the story starts to write itself thinking WTH!? What's he gonna do? LOL
·      (Whispers) I actually toyed with idea of having Sofie leave Eric for Brandon. (Dodges tomatoes and eggs from angry Eric loyalists.) But I didn't!! =D Still, I felt Brandon needed his happily ever after, and that's why I'll be giving it to him very soon. Of course, there will be a ton of turmoil, angst, and heart-stopping twists before he gets it. Hey! If he wants it just like all my other guys, he'll have to take it like a man! ;)
·      Many have mentioned enjoying reading about these second-generation Morenos. There are still quite a few first-generation stories that haven't been told, but let the record show that the seed has been planted. ;)
·      I still crack up when I read certain scenes in Romero, especially the ones with Manny and Max.