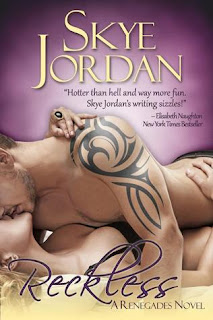 by Skye Jordan (Goodreads Author)
A couture wedding dress designer to the rich and famous, Lexi LaCroix’s image means everything. But crossing paths with a sexier-than-sin, bad-boy biker makes Lexi realize how much living she’s sacrificed for her success and one touch is all it takes to threaten her carefully choreographed life. When that touch fills far more than just Lexi’s physical needs, she finds herself torn between the career she needs and the bad-boy she craves.

Jax Chamberlin gave up the superficial life of acting for the thrill of running his own stunt company years ago. But a recent betrayal proves he’s still too close to the limelight to find a woman who doesn’t plan to use him as a stepping-stone to success. When the charming and mysterious Lexi offers him a totally anonymous hook-up during an out of town trip, Jax accepts. Only Lexi is more sextacular than charming, and Jax wants more.

But Lexi’s got a major hang-up over his renegade lifestyle, and Jax isn’t willing to change his ways. Especially not when he discovers who she really is. Because if she finds out his connections could catapult her to the top of her career, he’s afraid the fantasy woman he’s falling for might just end up like all the other gold-diggers. And this time, it’s not just his bad-boy reputation at risk, but his heart, too

From the beginning I was enamored with Jax.

Poor Jax with his libido leading him a stray

Then he gets stalked by. Oops! I mean meets Lexi who ignites something in Jax when he least expects it.

He is drawn to Lexi for her because he doesn't know who she actually is. So, why not have faceless sex with a stranger. (Why didn't I think of that?)

But the passion is off the charts and undeniable.


Jax wants more but Lexi puts her career first and keeps Jax in the one night stand box.

They can't stop thinking about one another but Jax is worried that Lexi is using him like all the others.

Jax finally mans up and makes contact and finally gets to really meet Lexi.

At this point I was expecting bedroom fireworks but what do you know the case of miscommunication and assumptions makes an appearance and all hell breaks loose.

Finally after actually meeting and doing this crazy thing called talking I get my fireworks.


"Rock yourself to heaven, baby."

But sadly all good things come to an end. Oops! I mean more miscommunications, assumptions, self preservation and another case of martyrism but love and passion are sneaky bitches and break free of their constraints and make things right. Which is my man Jax finding his HEA.