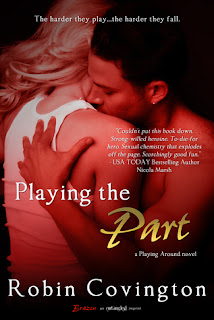 by Robin Covington (Goodreads Author)
After publicly self-destructing over a heartbreak a year ago, bestselling romance writer Piper James is now making nice with her publisher by agreeing to teach Hollywood's favorite action star how to act like he's in love. Only playboy Mick Blackwell has no clue what love looks like. When a seductive heat ignites between Piper and Mick, she jumps at the chance for a bit of fun between the sheets, but with two stipulatons: she's kept out of the public eye and things end when she returns to New York. Only Mick keeps changing the rules on her. Tempted by America's favorite bad boy, Piper is wondering how far she's willing to bend...

I was super excited to read this book since after A night of Southern Comfort I became a fan of Robin Covington.  I didn't know what to expect in this book but was pleasantly surprised with how it all turned out.

Mick Blackwell is a gorgeous, successful movie star. Who has never been in love and can't relate to his current role

Piper James is a successful writer with a jaded past that was in the spotlight.  Piper is called in to help Mick act like he is in love.

The chemistry is instant.


Mick leaned in, and heat swept over her skin, settling in her most intimate places.  He was the man every woman wanted in spite of his playboy reputation.  Or maybe because of it. She loved men who came with a warning label. And Mick Blackwell didn't just have a label - he had a neon "Flammable. Do not touch" sign flashing over his head.

They both thought that they could play along with one another without either of them getting burnt.

Because of Piper's past she can't believe Mick's intentions.  Because of Mick's non loving past he is not truly sure of his intentions until it is almost too late.

I really liked the story.  Their chemistry was experimentive and explosive while still being sweet.