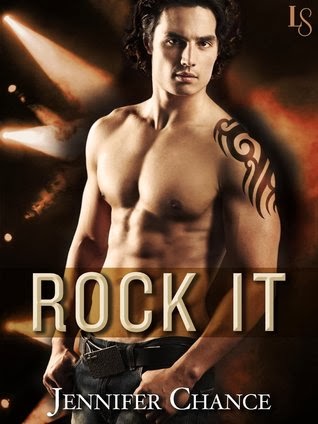 by Jennifer Chance (Goodreads Author)
Jennifer Chance unleashes her hot new series with the tale of a smoldering rocker and the fangirl who catches his eye—and finds herself living out her wildest dreams.

Lacey Dawes is a total pro at the talent agency where she works, and it doesn’t hurt that IMO Worldwide Media represents Dante Falcone. The rock god has starred in her fantasies since she was sixteen—and remains her secret crush to this day. So when Dante picks her to be the interim manager on his Dream It tour, Lacey can’t believe her luck. Handling Dante is sure to be the most exquisite, spine-tingling, nerve-wracking mix of business and pleasure ever.

Although Dante is grateful for the adoring fans who scream for one more of his full-throttle, soul-searing songs, being surrounded by a cadre of corporate types backstage is wearing thin. Then Lacey shows up. Yeah, she’s organized, smart, quick to get him what he wants before he knows he wants it—but Dante senses there’s something else going on with sweet, sexy Lacey. One kiss tells him what that “something” might be . . . and makes him hungry for more.

Well it had a rock star in it and I was in the mood so I thought I would give it a go. At first I thought it was going to be very predictable .... Rock star and a super fan who hides this knowledge to have it get thrown in her face as a crazy stalker.

Instead it ended up being about a rock star and a super fan who hid how much of a fan she was for it to blow up but for it to bridge them together because her being a fan ended up being a blessing in disguise because she has always been able to see the true Dante when no one else did.

This was a sweet NA rocker story with a cute couple, great friends (can't wait to find out more with Anna, Erin, Dani, Harry and Steve), super bitchy boss (so badly want to bitch slap her) and a sweet dreams do come true HEA.

Lauren
Posted by Live Read and Breathe at 18:20