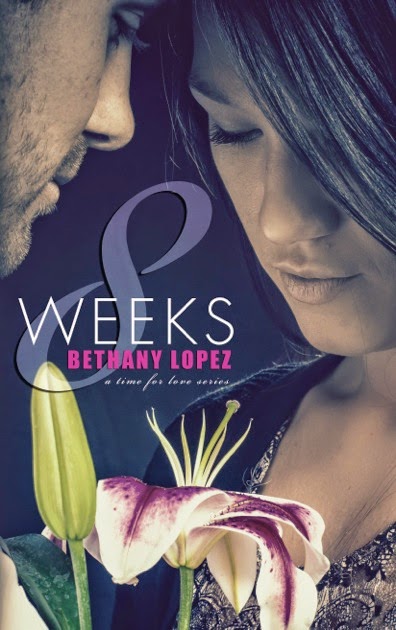 Description:
Is eight weeks enough time to earn back the love of someone you've betrayed...the only one you've ever loved?

Shelly has been in love with Cal since they started dating in eleventh grade. Despite everyone saying that the odds were against them, they got married after graduation and built a life together. Now, six years later, she is faced with the ultimate betrayal. Devastated, her first instinct is to call it quits…

After a drunken binge at his best friends’ bachelor party, Cal betrays the one person who has always been there for him, his wife, Shelly. Terrified and realizing she might divorce him, Cal must come up with a way to prove to her that his love is true…

Cal asks Shelly for eight weeks. Eight weeks to convince her that their marriage is worth the fight. Will Shelly be able to trust him again, or will their marriage end the way many others do when faced with opposition… In divorce?

Award-Winning Author Bethany Lopez began self-publishing in June 2011. Since then she has published various YA and NA books. She is a lover of romance, family, and friends, and enjoys incorporating those things in what she writes. When she isn't reading or writing, she loves spending time with her husband and children, traveling whenever possible.

Ok, let's start with first that I am a big fan of Bethany Lopez and her NA stories.  Right from the first chapter I was reeled in to find out how Cal was going to fix that major screw up.  But the more I read the more I got frustrated and had mixed feelings about the story.

It felt like Cal and Shelly were children playing grownups.  I totally got Shelly's reaction but I started to get so frustrated with her that she was being so immature and wouldn't even listen to Cal or have a conversation about what did or didn't happen.

For Cal I liked him from start to finish even with his screw up.  I can't imagine ever having to go through what they went through from either side but Cal always seemed to be the more mature of the two.

"No wonder you're so quick to give up ... I thought we were in a partnership, Shel. I've never expected you to ask my permission to do anything. I love you, for who you are, and I want you to do what makes you happy."

With this break came the realization that all was not perfect in their grown up marriage and this just forced them to deal with it properly so they can grow up and move on.

I LOVED the idea of this story but their immaturity especially Shelly drove me a bit batty at times causing me to get frustrated and not enveloped into the story.  However if you like NA then I think this series has loads of potential.   This book was about trust, forgiveness, love and second chances.  It's also about fighting for something worthwhile when all things could be lost no matter having the proper knowledge or not. Even though this was a NA book it felt more like YA emotions with sex thrown in.  Not saying that's a bad thing but I was left wanting more maturity and depth from this book.