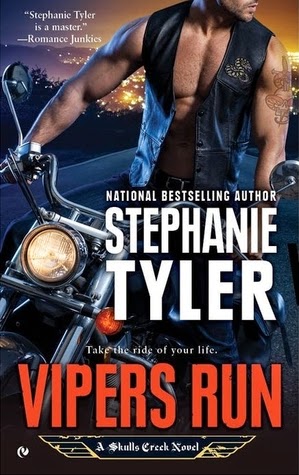 The Vipers Motorcycle Club has strict rules for their brotherhood and the women who enter it. Now one Viper is about to find out how much trouble one woman can be……

Former Army Ranger Christian Cage Owens joined the Vipers Motorcycle Club for its sense of brotherhood. In return, he pledged to live outside the law, protecting club members and their families, as well as keeping other MCs out of Skulls Creek. But when Cage discovers that a rival MC—one Cage has an all too familiar past with—plans to push meth into his town, he calls an old Army buddy turned private investigator who’s helped the Vipers in the past. By doing so, Cage endangers both his friend and Calla, a woman who works in the PI’s office. Now he’s made it his mission to track Calla down and do whatever it takes to protect her.

Thanks to the phone call with Cage, Calla knows she’s formed a deep connection to a dangerous man.  She quickly discovers that although he may live by a different set of rules, Cage is an honorable man who wants to be more than her protector—if only she can accept his dangerous lifestyle.  But Calla comes to Skulls Creek with her own set of secrets…secrets that threaten to tear her and Cage—and the Vipers MC—apart.  As they put their newfound love to the ultimate test, Cage will risk everything he cares about to save her……

Gah! I wanted to love this book as I am a softy when it comes to MC books but this one felt more like a watered down version of the SOA.  Some of the conversions were rushed and confusing.  The dual POV's often weren't clear and I had to re-read to find out who the POV was supposed to be from.

The idea of the book was good, where one chance phone call can change the fate of everything but it just didn't have the oomph to pull it off.  Calla works for a PI and answers the phone when she's not supposed to.  This call happens to be from Cage who happens to be dying because he was beaten, stabbed and shot.

After talking to Calla, Cage has something to fight for. This phone call is the catalyst for many things that felt all over the place and kind of jumbled but there was a HEA.  This is the part where I felt like I was re-watching a watered down version of the SOA.  But I did get my HEA in this MC world so that did make me happy.

I so badly wanted to love this.  It definitely was not my favorite but I would be willing to give this series another go to see if this was just a 'meh' one off or if the whole series will be 'meh'.

Posted by Live Read and Breathe at 23:48