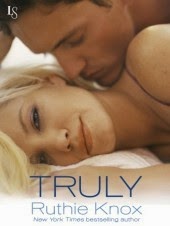 May Fredericks hates New York. Which is fair enough, since New York seems to hate her back. After relocating to Manhattan from the Midwest to be with her long-distance boyfriend, NFL quarterback Thor Einarsson, May receives the world’s worst marriage proposal, stabs the jerk with a shrimp fork, and storms off alone—only to get mugged. Now she’s got no phone, no cash, and no friends. How’s a nice girl supposed to get back to safe, sensible Wisconsin?

Frankly, Ben Hausman couldn’t care less. Sure, it’s not every day he meets a genuine, down-to-earth woman like May—especially in a dive in the Village—but he’s recovering from an ugly divorce that cost him his restaurant. He wants to be left alone to start over and become a better man. Then again, playing the white knight to May’s sexy damsel in distress would be an excellent place to start—if only he can give her one very good reason to love New York.
*********

First, let's have a shout out to Ruthie Knox who has again written a great story.

In this story we have Mae who has just publicly attacked her boyfriend after his proposal from hell then dumped him via a note and Ben a man who is angry, blunt and honest. Mae needs help so she takes a risk and approaches the angry guy at the bar who after he meets Mae wants to practice trying to be nice for a change by taking her under his wing.

"You have anything else on your agenda? Now that you've committed assault, dropped your asshole boyfriend, and gotten mugged?"

So many times people aren't honest with their feelings and that is what I loved about this book.  It's not all sweet and roses it's angry, truthful and honest.  Even though Mae just got out of relationship she is drawn to angry Ben.  Partly because he is gorgeous but also because he is refreshingly honest.

"You're allowed to hate it."

As Ben and Mae struggle with their own issues they bring out the best in one another however that is for them.

" ... sometimes everything looks right from the outside, but it's wrong.  Sometimes it looks wrong, but it's right. ..."

This book was great.  It was not your typical love story but it was a refreshing love story.  I loved the way the story was formatted and how the characters developed.  I went through the gamut of emotions routing for this unlikely duo and New York City.  I can not wait for the next two in this series.