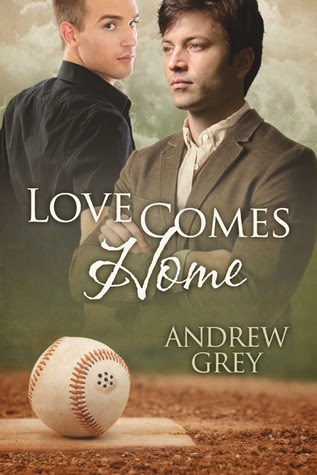 Tom Spangler is used to getting what he wants. When Greg captures his attention, he asks Greg for a date. They have a good time until Greg gets a call from the friends watching his son, telling him Davey has fallen. Greg and Tom return to find the worst has happened—Davey can no longer see.

With so much going on in his life, Greg doubts he’ll see Tom again. But Tom has researched beep baseball, where balls and bases make sounds to enable the visually impaired to participate in Little League. Tom spearheads an effort to form a team so Davey can continue to play the game he loves. But when Greg’s ex-wife shows up with her doctor boyfriend, offering a possible cure through a radical procedure, Greg must decide how far he’ll go to give Davey a chance at getting his sight back.

I think this week's themes for my reviews are 'this is the third book in a series and I didn't read the first two and now I regret it' as I believe the first two would have added so much more to this story.

The book starts with Greg and his son Davey who happens to unfortunately being going blind.  Greg and Davey are dealing with this new situation with the help of his friends (whom happen to be from books 1 & 2) then all of a sudden Tom who happens to have the same mutual friends is talking to Greg at a party and hit it off. The problem for me is all of sudden they were talking with no introduction, so I don't know if they met in a previous book or not but it felt like a fresh meeting so I'm not sure.

Then all of a sudden Tom is all up in Greg's space and business but at the same time this relationship was very slow moving.   I think this book had so much more potential if I had the backgrounds on everyone especially the friends as they are a huge part of the book.  They help Greg and Davey deal with Davey's blindness and help Greg to see Tom for who he is. (Which is a big ol' softy looking for love)

"...A lot of people think of being blind as a disability, but I never have. In some ways it's a gift, because we hear and truly feel the world rather than just see it..."

In the end I did like the story I just didn't love it.  It was a sweet story but at times I felt Davey who was I think 10 talked like he was 30 which felt out of place for me.  It was slow moving but once it hit its momentum the story grew much more on me.

This is the first Andrew Grey book I have read and even though I felt a bit lost at times it did not deter me from his writing style and I will definitely be reading future books of Andrew's.  I felt the idea of the story was heartfelt and I did like the blossoming of Greg and Tom.  There is such beauty about finding love when you least expect it especially when it is someone who is against all odds.

Lauren
Posted by Live Read and Breathe at 08:30