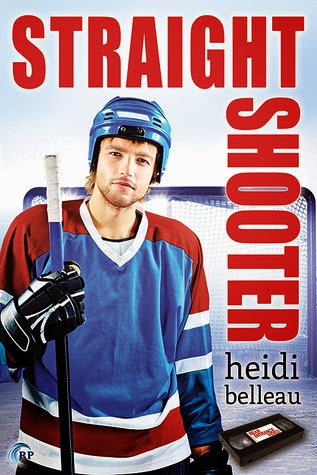 by Heidi Belleau (Goodreads Author)
This macho jock has a crooked little secret.

College hockey player Austin Puett is in trouble. Unless he starts treating his flamboyantly gay roommate with respect, he’ll lose his room and his job at Rear Entrance Video. But Austin’s got a not-so-straight secret of his own: nothing turns him on more than insults implying he’s gay—even though he’s definitely not!—and all his old coping methods have stopped working.

But meeting Liam Williams, the real person behind Puck, confuses Austin even more. Liam really seems to like him as a person, and Austin likes him back. And while Gay For Pay’s okay, what does it make Austin if he still wants Liam when the cameras aren’t rolling?

I got mixed thoughts on this book.  I will start with that this is the third book in a series and I did NOT read the first two.  Which I feel hindered my experience with this story.

Here we have Austin a straight man who is very confused because he gets turned on when he gets degraded.

With this new domination, Austin works through his kink confusion to open up a new door to emotional confusion.

"... Things aren't as black and white as you think they are.  It's not like there's a tiny island of straightness, in the middle of an ocean of gay, and if you so much as dip your toe - or get splashed by a wave or whatever - then, that's it, you're gay forever.... "

Once Puck and Austin work through their issues than BAM! Here is where the story got good for me.
Even though it is so not my kink, I did like the idea of it, but for some reason it fell flat at parts and just didn't grab me.  I was able to read the whole book no problem and was into the story but it took me a bit to get into but what I did love was the ending and the last part of the book.  Here is where the heart of the matter comes to a head and hearts are on the line.  I think if I read the other two books in the series, I would have connected more with Austin and his dilemma.  Because I missed the background and growth of Austin it took longer to enjoy this book.

3 Not So Straight Thumbs up!

Lauren
Posted by Live Read and Breathe at 00:15