A Prior Engagement Blog Tour- Review 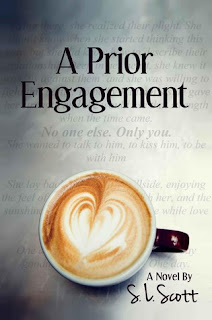 A Prior Engagement
By S.L. Scott

Blurb
Living in a world built on pretenses, Everleigh Wright discovers how carefully orchestrated her Upper East Side life has been. Trapped in an arrangement for social prestige and financial gain, she finds life is not as idyllic as she once thought.
William Ryder leads a life rich in family support and endless determination. While attending university in Manhattan, he becomes enamored with a classic beauty who holds many secrets beneath her quiet propriety. William falls head over heels crazy for her, and she falls for him and his unfaltering optimism and kindness.

William and Everleigh may come from different worlds, but their attraction is instant and their love undeniable. Hoping love conquers all, they will find out if their love is unstoppable when faced with the consequences of breaking a prior engagement.

“Right here, right now is all that matters.”

She kissed him not caring about how she looked or propriety. She did what she felt and she felt like kissing him twice, so she did.
After lunch, they did a little sightseeing, stopped for frozen custard then headed for the train station. As the train barreled back to Manhattan, Evie turned to William. She felt shy, but wanted a photo of him. “May I take a picture of you?” She knew once again she was crossing a line, but she felt selfish and wanted something just for her.
He chuckled at her formality. “Yes, if you want.”
She took a picture of him looking at her the way she most liked to see him, in like of her. His darkened eyes said more and everything that they both knew it was too early to say and she hoped to hold onto that look forever with the photo.
When the photo loaded onto the screen, she stared at it. She was soft spoken, but he heard her. “You look sexy like this.”
The right side of his mouth lifted into a smile, a bit confident, a tad cocky. He pulled his phone out and flipped through the options. William stopped and smiled at his display. “I think you look really sexy like this.” He turned the phone around for her to see and her mouth dropped open.
“When did you take that?” She tried to act mad, but she thought the picture was funny.
“I like the way you’re about to lick the ice cream, tongue out all greedy-like.” He laughed again when her fist hit his arm. “Okay, okay. I shouldn’t have taken it without you knowing, but I really do think you’re pretty damn sexy eating ice cream. That right there is what fantasies are made of,” he said, pointing at the picture.
“Ewww! Stop it right now. No doing anything dirty while looking at that picture,” she demanded, trying to grab the phone.
He held it out of her reach and continued the joke. “I don’t need this picture. It’s burned into my brain.” He felt her playfully hit his arm again. Grabbing her hand, he eyed her. “No worries. I only have chaste thoughts about you.” He tried to sound convincing by saying that with a straight face.
But her expression changed. “Well, that’s disappointing.”
Putting his arm around her, he squeezed her into his side and laughed. His grin got even bigger when she relaxed into him for the remainder of the ride back to New York.
…
Luck was something Evie didn’t feel was on her side. She was focusing on more proven methods of destiny, like action.
Author Info

S.L. Scott is a former high-tech account manager with a journalism degree pursuing her passion for telling stories. She spends her days escaping into her characters and letting them lead her on their adventures.
Travelling, music festivals, and surfing are a few of her hobbies she loves, but she doesn’t get to enjoy on a regular basis. She has an obsession with movies, a varied taste in books, and collects Fitz & Floyd teapots. With a memory full of useless trivia facts, and a Keurig addiction, she loves a fun night in with her family as much as a loud night out with her friends.
Scott lives in the beautiful Texas hill country of Austin with her husband, two young sons, two Papillons, and her vivid imagination.
She welcomes your notes at sl@slscottauthor.com. 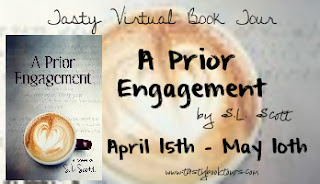 Well, here is the thing I don't know if it was from my previous book hangover or not but I liked it but I didn't love it.

I liked the concept of the story of the upper class and lower class finding love somewhere in the middle.  But I don't know if it was because of the upper crust attitude but I found the dialogue very stiff but that could have been the authors goal so if it was than she got it, if it wasn't then I just shrug my shoulders with a big huh! Some of the lines were also a wee bit over the top.

The story had elements of gossip girl mixed with different angst and expectations.

It was neat to see the parallel of Everleigh's world to arrangement marriages of the past, which is a world that I have no clue about.

I liked William he was cute boy from the lower class who falls for the girl out of his league.

But Everleigh is lost and unhappy and meets William who shakes up her world.

There worlds collide and tear them apart from miscommunication, mistrust, lack of faith, commitments and expectations but Love is a powerful force.

Is love enough? That is the question.  Love and Fate are strong contenders for Everleigh and William.