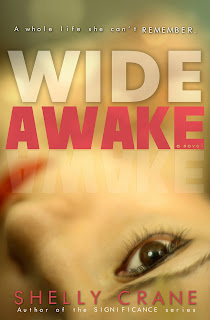 Book Description:
A girl.
A coma.
A life she can't remember.

When Emma Walker wakes up in the hospital with no knowledge of how she got there, she learns that she's been in a coma for six months. Strangers show up and claim to be her parents, but she can't remember them. She can't remember anyone. Not her friends, not even her boyfriend. Even though she can't remember, everyone wants her to just pick up where she left off, but what she learns about the 'old her' makes her start to wish she'd never woken up. Her boyfriend breaks up with the new girl he's dating to be with her, her parents want her to start planning for college, her friends want their leader back, and her physical therapist with the hazel eyes keeps his distance to save his position at the hospital.

Will she ever feel like she recognizes the girl in the mirror?

YA author from a small town in Georgia and loves everything about the south. She is wife to a fantastical husband and stay at home mom to two boisterous and mischievous boys who keep her on her toes. They currently reside in everywhere USA as they happily travel all over with her husband's job. She loves to spend time with her family, binge on candy corn, go out to eat at new restaurants, buy paperbacks at little bookstores, site see in the new areas they travel to, listen to music everywhere and also LOVES to read.

Her own books happen by accident and she revels in the writing and imagination process. She doesn't go anywhere without her notepad for fear of an idea creeping up and not being able to write it down immediately, even in the middle of the night, where her best ideas are born.
Author social media links:
http://www.shellycrane.blogspot.com/
http://www.facebook.com/shellycranefanpage
http://www.twitter.com/#!/AuthShellyCrane
http://www.goodreads.com/author/show/4951964.Shelly_Crane
http://www.amazon.com/s/ref=nb_sb_noss?url=me%3DAG56TWVU5XWC2&field-keywords=shelly+crane&x=8&y=13
http://www.barnesandnoble.com/s/shelly-crane?keyword=shelly+crane&store=allproducts
Excerpt


The next couple of weeks brought plenty of action and events. I focused harder on the therapy and tried to focus less on Mason. He seemed to be doing the same. I had renewed vigor, which led to stamina, which led to more workouts, which led to exhaustion, which led to tons of sleep, which led to healing, which led to me walking.
All.
By.
Myself.
This simple task, this simple thing that we all take for granted, that's so cute and monumental when a baby takes his first steps, but these first steps were so much more than that. Though I cried like a baby, I wasn't one. And though my mother cooed and fawned over me (because I had invited them that day to come because I just knew that day was going to be the day) I wasn't a toddler. I was me. I was finally getting a little piece of myself back. And though I tried so hard not to, my eyes drifted to the one person in the room that I knew would understand all this better than anyone else.
Mason's eyes were already on me from across the parallel walking bars. This time, I didn't shy away from his gaze. I knew that our terms were shaky, but so was I, and I needed the stability of my lifeline. As our gazes collided, I expected a smile and happiness, but I didn't expect the level of pride and utter joy to be so prominent. The man was bursting at the seams with it. It filled his face and the smile he wore was the beautiful one that made me feel like everything was going to be OK.
His lips parted and even in the loud room, I could still hear his breath. He said quietly, "You did it, Em." He moved forward and touched my arm. It was the first time he had touched me in weeks that had nothing to do with therapy. "I'm so proud of you."
As his fingers circled my elbow, and I tried not to shiver in his grasp, I asked softly, knowing the answer, "You didn't believe that I was going to walk again some day?"
"Of course I did." He smiled wider. "But today was the first time that you've ever believed it."
He was right. Having faith and having hope were not the same thing, and I was just now understanding that.