The Dom With The Perfect Brats Blog Tour - Excerpt & Giveaway 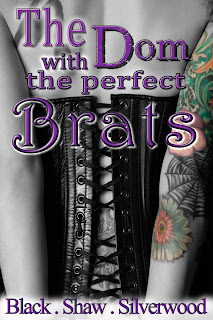 Blurb
Godfrey Cross is a big, tattooed Dom with no tolerance for brats. But when he meets two mouthy vanilla girls, he begins to see their charm.

When his need for control tears their relationship apart, they must learn to compromise or they will lose each other. People may not be perfect, but could these two be perfect for him?

EXCERPT - PGish
Someone stepped up. Another customer looking for coffee. Izzy let her gaze cruise upward.
Gulp.
Cross stood, no loomed, behind Gemma.
The man obviously had a PhD. in looming.
Damn it though, Cross had the solidity of a bulldog on steroids. Not classic squeaky-clean handsome, but a sort of rugged crash-and-burn handsome. With his buzz-cut black hair, muscles and menagerie of tattoos, the man looked like he lived in a cave and sanded timber with his head and flung innocent young women down on beds and had his wicked way with them.
“Uhh. Hi…” Oh shit. Did we say his name in the last few minutes? “Can I get you anything?”
Gemma stiffened, her eyes widened.
“No. I’m here to fetch Gemma.”
She twisted to look back at him.
“Malachi wondered if you were growing the coffee yourself.”
“You came here to fetch me? Are you Malachi’s lapdog then?”
He arched a brow. “I’m nobody’s lapdog, girl.”
Now Gemma was flirting? Not to be outdone, Izzy stepped up the game. “Tsk, tsk, Gemma. He’s clearly not a lapdog. More like an errand boy. You need to take your shirt off though. Then we’ll give you a tip.” She winked.
“Good call!” Gemma turned to Cross. “With those muscles, you’d make a fortune as a Cabana Boy.”
He grunted then stepped closer, crowding Gemma against the counter, which brought a wave of her scent toward Izzy. “Cabana boy? I think you have the wrong idea there. A couple of concubines serving me drinks naked is more my style.”
Oh hell. Now she was imagining herself kneeling before him while he gazed possessively down at her. Way to go Miss Feminist of the Year.
The continued looming seemed to have rattled Gemma’s brain because her smartass comments had run out. Now all she did was stare up at him, her freckles brightening as a blush tore across her cheeks.
“You two are just trouble waiting to happen. I heard my name when I walked in. What are you brats up to?”
Think fast, think fast. Clearly Gemma wasn’t up to the task. “You’ve got a Goth clothes shop. I’m partial to Goth.” She made herself bright and enthusiastic – not hard to do as she did like the style. “We were talking about your sale.” God, she prayed Gemma was fast on the uptake. Something about lying to Cross sent a frisson of fear through her.
After one glance across and an amused frown, Gemma chipped in. “Yes. I peeked in your window too. The sale starts tomorrow? We were thinking of using our sexy feminine wiles on you to get to see it early.”
Izzy couldn’t help smiling. Finally!
Godfrey narrowed his eyes. “You were talking about my sale?”
In the face of his measured stare, it took a moment before Izzy could free her tongue, but she managed. “Yep.” Then she swallowed cautiously. The man had intimidating nailed. “We were wondering if we could get an early look.”
Gemma pulled a face and waited.
She figured the woman was aiming to, all at once, wrap Godfrey round her finger, bamboozle him, and maybe get a look at the sale early on top of it all. She could go with that.
Instinct flared. No way was she letting Gemma get cozy with him when she wasn’t around. That reaction surprised her. But he was a hunk of masculinity.
He looked them over, suspicious still, yet seemingly rolling with it. “You can come over tonight and get a sneak peek. Happy?”
They both nodded.
Hell, was she going to do this?
“Okay. Be there at ten. You have to stick to my rules though. It’s a business, not a playground.”
If this had been one-on-one she’d never have dared to follow through. Godfrey Cross late at night? Not a chance. And…rules?
“Deal.” Gemma nodded and, automatically, she did the same.
Then her brain nudged Izzy with the possibilities. Night time. Alone with Gemma and Cross? Clothes changing and, maybe naked flesh? She was going to be bright red half the night. Gemma might even let her help with zips and stuff. Well, she could hope, couldn’t she? Hope sprung eternal, and all that…though eternal was taking much longer than she appreciated.
Izzy sighed. It’d been years since she’d last dared touch a woman.

Prize Information:
The grand prize, a signed copy of The Dom with a Safeword, and swag- bookmark, magnet and necklace.
a Rafflecopter giveaway

Buy Links:
Buylinks for The Dom with the Perfect Brats are HERE