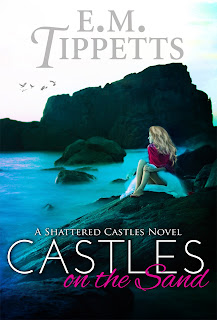 Giveaway per blog: (1) eBook copy or (1) Print copy of CASTLES ON THE SAND. Open International
a Rafflecopter giveaway

Sneak Peak
A million thoughts flit through my mind as this mystery person kisses me. It's not a passionate kiss; it's an obnoxious one, the person sucking on my mouth in a really annoying way. I squirm and the person lets me go.
I blink and find myself face to face with Alex.
He smirks, as if to say, “Well, it was worth a try.” And turns to leave.
But my temper flares and I grab his arm. “What was that?”
No response, just the usual stare.
“You don't do that, jerk. I don't care how hot you are, you are not hot enough to get away with assaulting people.” I wonder if it counts as assault, though. I don't know the legal definition, but I bet he does, which means I'm insane to grab his arm and yell at him.
He looks down at me, pulls his arm out of my grasp, and then glances around, though there isn't much to see besides the blank white sides of the vans we stand between. What's odd is how vulnerable he seems now, even though he's six feet tall at least, and all corded muscle. He shrugs again, as if this is supposed to explain why he planted one on me.
And then it clicks. “That whole promise to Carson, the next guy who kisses me is gonna be my boyfriend? Dream on. Sneak attacks so don't count.”
“What if you sneak attack me?”
Really, I think, it's better when he's silent. I unzip my backpack, pull out his jacket, and try to shove it at him, only to discover that he has rock hard abs. I'd thought that was just a saying. It's like punching a brick wall and I wince in pain.
He, however, stares down at his jacket as if I just handed him a brick of gold.
“Why are you even in school today?” I ask. “Why aren't you in jail?”
A sullen glare is the only reply to that one.
“And listen, you are a loser, you are a creep, you threatened me with a switchblade-”
“Was a joke.”
“It wasn't funny! Let me add to that list of what it would take for a guy to be my boyfriend. He'd have to be nice to me. He'd have to talk to me sometimes. He'd have to not feel like he has to sneak around and catch me off guard. He'd have to act like he likes me.”
“That all?”
“What? It rules you out. Except for the talking thing. And what is with the talking thing? Why are you talking now?”
He ignores that, lifts his jacket to his face, and sniffs it.
“Oh, and smoking? Disgusting. I washed your jacket because it was giving me a headache.”
A dig through his pockets, and he pulls out his cigarettes, then looks at me with a lifted eyebrow.
“What? I am not a thief. Of course I put them back.”
The pack crushes in his fist.
“What are you doing?”
He digs in his pocket again and retrieves his lighter.
“Yeah, I gave that back to you, so you'll have it to burn down the school or whatever.”
But rather than ignite it and shove the flame at me, as I expect, he tosses it to me and I catch it awkwardly with one hand. “Thanks,” he says. He leaves without a backwards glance.
Lauren's Review
Posted by Live Read and Breathe at 02:00