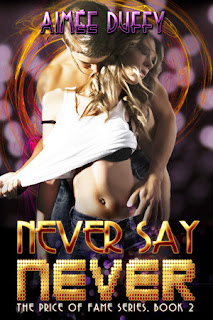 When pretend turns to desire, heartbreak is unavoidable.

Sander Chase needs a date for his ex-fiancée's engagement party, but he doesn't have time for a woman in his life. Between working on the TV show Do You Have What It Takes? and his band reforming, he's too busy for a relationship. What he needs is a pretend girlfriend. He thinks he may have found the perfect woman for the job, and the bribe he offers means she's sure to accept.

After losing her job in the film industry, breaking up with her movie star boyfriend, and finding out her mum has dementia, Chloe Butler returned to the UK determined to put her life back together. The last thing she needs is to parade around London on the arm of a celebrity, and after the heartbreak caused by her ex, she swore she'd never again date a star. But when Sander offers her a chance at her dream job, it's not something she can turn down.

As Chloe gets to know Sander she learns he's nothing like her scumbag ex. But she struggles to fight her attraction to him, knowing their relationship is only for show and their separation date is closing in fast.

Ignoring the insane chemistry between them should be easy for Sander, especially since he carries a secret that means there can be no future for them, but the more time he spends with Chloe, the harder it is to keep his hands to himself.

Content Warning: contains more denial than you'll find in a courtroom, more sexual tension than most people could handle, and explosive sex that some readers may find long overdue.

Chloe Butler’s mouth dropped open. She struggled to remember how to close it as she stared at the man with the expectant expression on his avenging angel face. She couldn’t have heard him right. Sander Chase would never ask someone like her out on a date.

He flashed his Hollywood smile. “Come on. Don’t make a guy ask twice.”

Nope, she’d not misheard him, nor had she gone mad. Months of serving him coffee and this was the first time he’d shown any kind of interest in her.

“I’m sorry.” She retreated a few steps. She couldn’t date a celebrity, not after what happened the last time. She was just beginning to get her life back together. Not to mention the fact her mum needed her around more than ever. “I can’t. Thank you for the offer.”

Chloe tried to smile politely, but it was harder than usual. She turned to head back to the counter to get on with her work. If her boss Richard caught her talking to a celebrity, he’d get the wrong idea and hand her a P45 before she could explain. After all, the coffee shop was a classy place. Not even the press were allowed in.

A large, warm hand ensnared her wrist and drew her to a halt. Electrified jolts shot up her arm from the contact.

She turned back to Sander and saw his brow was raised and amusement glittered in his baby blue eyes. Pushy, wasn’t he?

“Don’t want to,” she replied, determined not to give him any hope.

Can’t left wiggle room, and there was definitely no wiggle room. She’d sworn off men after the last one had taken her for a mug.

Her reply seemed to please him. His grin grew huge and her heart sped. She frowned at the reaction and put it down to the stress of the situation. After all, as far as she was concerned, her libido was extinct.

Was he mad? From her experience, celebrities could be a little…odd. But she’d never met a full-blown lunatic before. “I’m sorry, I don’t know what you mean.”

Why wasn’t she backing away? Better yet, why wasn’t she demanding he let go of her arm? She darted a glance around the coffee shop. Most of the customers’ attention was on their morning papers.

Hmm, definitely time to call the men in white jackets. Sander had clearly lost his marbles. “I really have to get back to work.”

She couldn’t believe a man who’d been in one of the best male vocal pop groups of all time had lost his mind. Or maybe that’s what the pressure of it did to him. She vaguely recalled the rumors surrounding their split, but hadn’t paid much attention to the international news. At the time she’d been in LA and stupidly in love with a jerk.

Sander released her arm and sighed. “I’m not saying this right, am I?”

He raked a large hand through his golden hair and blew out a breath. She smiled at his exasperation, but still didn’t move away. Chloe shook her head in answer to his question.

“My manager called today.” Sander waved his hand to urge her closer. She obeyed. “He wants to get the group back together.” His hot breath caressed her neck and she shivered. The smell of espresso mingled with his spicy aftershave resurrected those bloody extinct hormones. “One of his conditions is that I attend Paul’s engagement party next Friday to show the world I’m over our…fallout.”

Author Info
About me (snooze—can you tell I hate the me stuff? Lol)

For as long as I can remember, I've had a good book in my hands. In primary school I loved Roald Dahl. In high school my English teacher introduced me to Charles Dickens, Stephen King, Jane Austin, Emily Bronte, and Shakespeare. It was then that I discovered my love for romance and I've wanted to pen my own imaginary heroes and heroines for others to enjoy ever since. Only in the last few years was I lucky enough to meet some fabulous and encouraging people to help me gain the skills to make that dream possible.

I live in sunny Scotland in a small town near the Ochils and work nine to five in a solicitors office. In my free time, you'll find me on Facebook, stalking *cough* following friends on Twitter, and may even catch me shoe shopping.

Giveaway
Aimee will be hosting a TOUR WIDE COMMENTER Giveaway for a $20.00 Amazon Gift Card
a Rafflecopter giveaway

When I read this it was just what I needed. A light quick love story.

This book is technically book 2 of a series but I have not read the first one nor did I feel it affected my reading experience.

It was a cute story about two people who put up walls to protect themselves as well as the illusion of protecting others with these walls.

The story was a bit predictable but like I said exactly what I needed with no huge drama or heartbreak.

Sander would be considered very successful to everyone but to his parents and to himself.  He feels like a disappointment and failure.  He was part of a successful pop band until his fiancee cheats on him with another band member.

Insert Chloe who is a gorgeous make up artist/ coffee barista who is guarding her heart from celebrities.  Sander needs a date for publicity to his ex-fiancee and ex-friends engagement party and Chloe doesn't want a relationship so this sounds like the perfect solution.  Until...

Well of course that is the idea until emotions get involved then all hell breaks loose with their hearts.

But Chloe can see through the potential of Sander and likes him for who he is and not for what he portrays.

With Chloe's love it opens Sander's heart to the possibility of so much more.