Why is Mason Book BF worthy?
1) He fights for what he wants and won't give up
2) If he can love a woman the way he loves his family than he is a keeper (which he does and more)
3) He can cook, put flower arrangements together and is sexy as sin

Here are some examples of why I love Mason:

"Sheath your claws, Lena," he said with what seemed like, great patiences. "I was telling my mother about the docotr who'd made such an impression, that I'd taken her to my kitchen and cooked for her."

"Actually, it is.  My dad once told me that one day I'd meet someone who drives me so crazy I want to strangle her and yet never would because I can't bear for her to be gone. Well, that's when I'll know I've met a woman worth keeping."

"I'm not going anywhere unless you make me or someone up there," he paused, raising his eys skyward, "makes me. But you can't go through life not letting anyone in on the off chance they'll die. Or you'll end up dying from a lonely heart."

All quotes and phrases from Exquisite from Ella Frank. 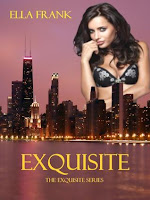 by Ella Frank (Goodreads Author)
Her heart was guarded…

Tormented by self-imposed guilt, Dr. Lena O’Donnell has spent the last nine years in survival mode. Struggling through days that seem to blend together and battling her way through each horrifying night, she’s determined that this is what she deserves…

Until he tore down the walls…

Mason Langley’s life is going exactly the way he planned it, until her. A confirmed bachelor and the successful owner of the hottest restaurant to hit Chicago, he never expects to be blindsided by an angry woman in a pair of scrubs. No matter how hard he tries, he can’t seem to shake the doctor, and he finds himself liking the way she makes him feel.

Almost over night Lena finds her world turned upside down by Mason and the sexual desire they discover together. Slowly, she lowers her guard and invites him inside but when tragedy strikes she begins to believe that sometimes it’s better to be alone and safe than to love and lose.

Continue with Mason & Lena with Shelly and Josh in Entice which releases Feb. 1/13