The Stranger: Just One Night Part 1 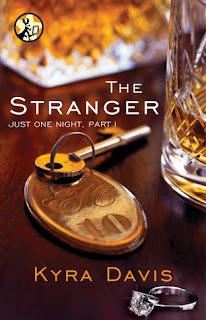 The Stranger (Just One Night #1)

by Kyra Davis (Goodreads Author)
Kasie knows who she’s supposed to be. But one passionate night with a mysterious stranger will teach her who she wants to be.

You should sleep with a stranger, her best friend whispers in her ear as they take to Vegas for one last pre-wedding fling. Despite her best intentions, when Kasie Fitzgerald enters the casino and sees him, a man whose tailored clothes belied a powerful, even dangerous, presence, she loses herself to the moment. Maybe it’s the dress, much shorter than she’d ever normally wear, or the Scotch, but something makes her give herself over to him more completely than she's ever done with a man before.

It was supposed to be just one night. But right as she’s thinking she wants more, he shows up in her office with an agenda. As the billionaire CEO of a company that’s engaged her PR firm, his demands just became her reality...and he desires so much more than just some attention in the boardroom.

I didn't know what to expect from this novella but I was pleasantly surprise.  There was lots of chemistry, passion and orgasms.

I'm not usually a fan of cheating as I always believe that if you are questioning things than it's time to communicate or break up versus cheating but I understand the doubt, desire and confusion to lead people to make certain decisions.

Kasie is prisoned in a world of what everyone wants her to be but not until she meets Robert does she realize that there is so much more to her and everything around her.  Robert opens up a part of her, the true passionate side of her which brings her alive but comfort and stability are plaguing her to believe that what she truly wants and feels is wrong.

Together Kasie and Robert have extremely explosive chemistry and just feel right together...you guessed it. I am so Team Robert, was there any doubt there.....No there wasn't.  I believe we should be in a relationship that makes us truly happy and not complacent.

Robert has that sexy powerful feel about him that oozes out of him yet he has a softer side that can see Kasie for who she really is.  Hmmm hard to fault Kasie when it's Robert that is getting her attention.

The ending. OH! BOY! another cliffhanger....what is going to happen with Dave and Robert? So many questions are left unanswered.  Can't wait for the next two installments.