Fight With Me (With Me in Seatlle #2) 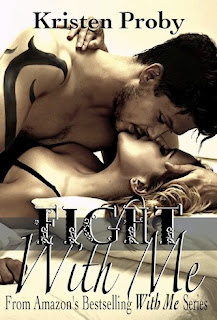 Fight With Me (With Me in Seattle #2)

Adult
Source: Kindle
by Kristen Proby (Goodreads Author)
Jules Montgomery is too busy and content with her life to worry about a man, especially one Nate McKenna. If growing up with four brothers has taught her anything, she knows to stay away from sexy men with tattoos and motorcycles. That goes double if he's your boss. During the one incredible night they shared, he violated the no fraternization policy...among other things, and it won't happen again. Jules won't risk her career for mind-blowing sex, no matter how much her body and her damn heart keep arguing with her.

Nate McKenna could give a shit about the no fraternizing policy. He wants Jules and he'll have her. The rules could bend around them, or be damned. He's not a man to be taken lightly, and Jules Montgomery is about to find out just how he responds to being pushed aside after the best night of sex he's ever had. She can fight all she wants, but he'll have her in his bed in the end.

FIGHT WITH ME is the second novel in the With Me In Seattle Series.

So in the first book of the series I liked it but I felt their was something missing yet I was still invested in the characters.  With this I didn't have any real expectations but in this book it totally rocked and I have a feeling that this series is just going to get better and better.

In the first book we already meet Jules and Nate.  Jules was a pretty big character and super loving so wanted her to find the happiness she deserves.  I loved the chemistry between Nate and Jules. At times I found their relationship to be moving a warp speeds but the thing that balanced it out was Nate's love for Jules. You feel it ooze out of him from the very beginning and how Jules can't see this I have no idea.

Nate is loving, sexy, caring, supportive and just plain ol' bad boy hot.  If Jules didn't keep him then I sure would have. *Sigh* why do they have to be fictional characters.  I can't wait to see more of the brothers in the series.  Their protective loving side can have funny moments and harsh moments but in the end you know they that way because of how deeply they love their family.

Nate & Jules steam up the pages so be aware that you may need a air conditioning.  This is a great series and I am invested to find out more.