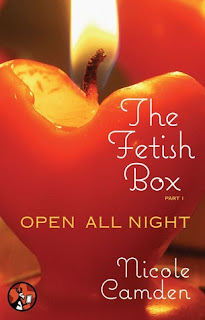 by Nicole Camden (Goodreads Author)
An enchanting eBook debut about a world where your fantasies come true and nothing is quite what it seems. Come on in to realize your heart’s darkest desire...Virginal twenty-two-year-old Mary has just inherited a sex shop in Florida from her mother. After a long drive from California, she arrives at her deceased mother’s house only to be confronted immediately with two equally sexy strangers: the strong, silent John and the irreverent, taunting Max. She’s innocent, almost completely untouched, but feels a completely uncharacteristic pull to each man. Shocking even herself, she realizes it’s not an unwelcome desire.

Max is a playboy who knows how to give women what they want, but John… John might just be able to give Mary something even she doesn’t know she needs…

Well it is an interesting world to get thrown into when you know nothing of your mother and yet get left everything and everyone in her will.  Now add being a virgin in a world of kink and fetish is a just asking for trouble.  I have to say that is one way to lose your virginity and one Mary will never forget.  I like that fact that it is John that she chooses because she sees John for John and not for what he looks like and she sees the potential of what John can be.  However this world is so unknown for her and new with oodles of temptation. 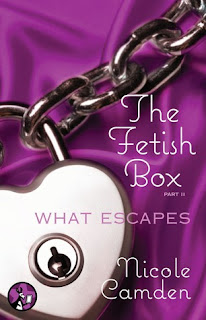 by Nicole Camden (Goodreads Author)
The breathtaking second installment in the Fetish Box eBook series…open the box and see what escapes…Mary is surprised by the deep feelings that follow in the wake of her first sexual encounter, but fascination with her lover John doesn’t dim her desire for the unapologetically lusty Irish bar-owner, Max. Feeding one hunger has unleashed other needs, and Mary wants to experience everything her new life has to offer.

But Mary’s dark desires aren’t the only ones swirling in the depths of The Fetish Box, and violence erupts amid the passion. When one of the men is attacked and the people at The Box put in danger, Mary realizes that some desires are more dangerous than others…

After she gives her golden ticket away she quickly starts to learn the world of fetish while having to deal with a shit load of bad luck with break ins, beatings and robberies.  With all of this though you see her and John becoming closer while she muddles her way through her new life.

This book was like the bridge book of the 3 part series and gives you enough to want to know more about finding out what happens with the break ins and with John. 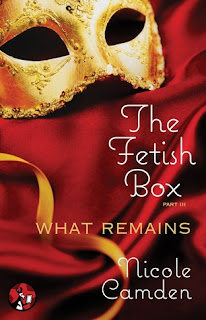 by Nicole Camden (Goodreads Author)
The breathtaking final installment in the Fetish Box eBook series, where anything is possible…when passion is unleashed, only time will tell what remains…In an attempt to seek out the source of the violence against her friends, Mary takes on a role she’d never imagined she’d play—a role that requires Mary to embrace the darkest parts of her soul.

For the first time in her life, Mary understands who she is and where she belongs. What remains when you take away the sex and fun and adventure…is love. Love for her new friends, love for her lover, and love for the mother she never knew. She’s willing to risk anything—do anything—to keep them safe…

Ok so far I have been invested in this series and want to know who is behind the attacks and of course to find out more about John and Mary.  Now I'm all over temptation and what if's but I was a little disappointed that she slept with Max. It just felt like a well oops! we had sex but I'm really in love with John. I don't know how much relevance it had to do with her evolution but it is what it is.

In the end Mary inherited not just the business but a family and community that accepted her from the beginning and made her life complete.

The series was left off with many questions so I don't know what the author has planned but I think a spin off or companion series could be a possibility and I am invested enough to find out more.
Posted by Live Read and Breathe at 09:13