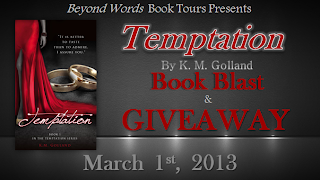 That is what 35 year old, happily married mother of two, Alexis Summers finds out, when decides it is time to return to work. After being a stay-at-home Mum for the past nine years, Alexis now realises a complete career change is just what she needs.She becomes a Concierge Attendant in a prestigious hotel in Melbourne working for the owner of the hotel, Bryce Clark. He resides in the penthouse, is extremely hot, and is a man who always gets what he wants, and what he wants is Alexis. She does a relatively good job resisting Bryce at first, but the undeniable chemistry, sexual tension and playfulness between the two of them is intense. He has copious amounts of money, sex appeal and above all, is a genuinely nice guy. Bryce has been waiting for his one true love to come along, and he is positive that one true love, is Alexis.There is one problem, she is happily married to Rick, and no matter how strong her feelings are for Bryce, she is adamant she will not cheat. She draws a line in the sand, but finds it increasingly hard not to cross. Will she succumb to Temptation?

So I liked the concept of this story and the idea of the temptation especially when her life wasn't crap to begin with. In this book we meet Alexis who is married to Rick who seems pretty normal and loving.  We also meet Bryce her sexy boss who falls in love with Alexis and doesn't back done until he gets what he wants.

In this process she begins to fall in love with both men but with that there are always problems.


"I heard a quote once, by memory it was by Mr. Johnny Depp, it might pertain to you - If you are in love with two people, choose the second one;  because if you really loved the first one, you wouldn't have fallen for the second." loc 3245 ( I think that sums up alot)


With this dilemma Alexis became a bit ...

I have to admit I don't know which team I'm on between Bryce and Rick normally not a big fan of cheaters but there is something very charming about Bryce that I can't let him go and with Rick he was so behind the scenes that we don't get a true picture. I think the next book will build them up more so we can pick a true winner between the two.

However whatever man she picks I just don't want her kids to be affected with all of their choices.

In the end I did like the story and all the characters and can't wait to find out what happens.

K.M. Golland was born and raised in Melbourne Australia. She studied Legal Practice for two years, and worked as a Land Conveyancer for four years before putting her career on hold to raise two beautiful children. She always had a love of reading, and decided rather than returning to the Legal Industry, she would become a Writer, publishing her debut novel Temptation (Book 1 in The Temptation Series).

The author is giving away an ecopy of Temptation to a single commentor chosen from the tour.