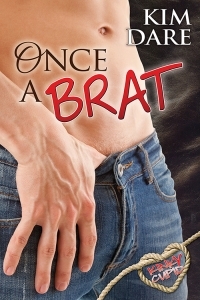 Experienced dominant Marcus has a stalker. On the plus side, the boy following him around his local leather club is gorgeous and a self-professed submissive. Unfortunately, he’s also inexperienced, bratty, and liable to drive Marcus insane within his incessant chatter and questions.

Bret Daniels fell head over heels with Marcus the moment he first saw him. He’s willing to do whatever it takes to get Marcus’s attention and prove his worth as a submissive. He might not be a traditional sub, but he knows he has a lot to offer a dom who can handle his quirks.

When Marcus gives in and agrees to do a scene with Bret, sparks fly. One scene quickly becomes another, and another. But will it be a case of once a brat, always a brat? Bret intends to prove to Marcus that—expectations and experiences aside—he deserves his master’s collar.

This title is part of the Kinky Cupid universe.

For Marcus he knew there was something with Bret and it charmed him and the minute that the two of them get together their bond is sealed.  Together they are spectacular and quirky yet loving.

It was an unconventional love story worthy of 4 thumbs up for me.