If it Flies (Market Gardens #3) 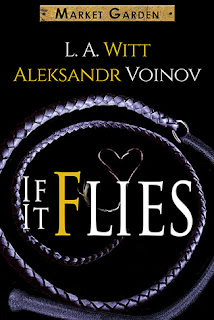 If It Flies (Market Garden #3)

Nick isn’t just any rentboy, though. He’s a Dom, he’s a sadist, and he’s everything Spencer didn’t know he was missing. One night turns into more, and before long, Spencer is one of Nick’s regular clients.

Both men think they’re just scratching each other’s backs: Spencer’s exploring a submissive, masochistic side he never knew he had, and Nick is getting off and getting paid. But as time goes on, it’s clear their strictly professional arrangement . . . isn’t, and if Nick has one hard limit, it’s that he doesn’t get romantically entangled with his johns. The problem is, while Nick doesn't want to be owned, Spencer’s no longer content with just renting

I have to admit I love this series. There is just something about this forbidden world and unconventional love stories. Finding love when we least expect it and finding out about one's self.

I was curious to where this story was going to go meeting Nick in the last book and I loved seeing the soft part of him and especially since he did not see it coming at all.

With Spencer he too was just looking for a release so why not just rent it instead of getting emotionally evolved but as soon as he met Nick he was done for.  Together even though there was a definite dominant and submissive roles you really see the bond forming between them and making that connection between them so much stronger.

This book didn't have the same power of Tristan and Jared but its depth and storyline was so different it is truly hard to compare between them.

I liked the chemistry between Spencer and Nick and felt their angst and bond.