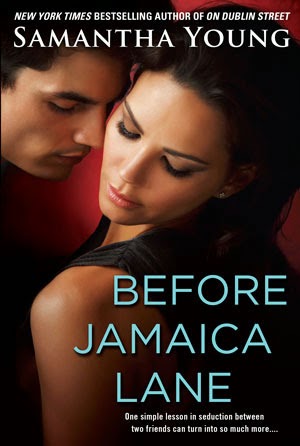 Before Jamaica Lane (On Dublin Street #3)

Despite her outgoing demeanor, Olivia is painfully insecure around the opposite sex—usually, she can’t get up the nerve to approach guys she’s interested in. But moving to Edinburgh has given her a new start, and, after she develops a crush on a sexy postgrad, she decides it’s time to push past her fears and go after what she wants.

Nate Sawyer is a gorgeous player who never commits, but to his close friends, he’s as loyal as they come. So when Olivia turns to him with her relationship woes, he offers to instruct her in the art of flirting and to help her become more sexually confident.

The friendly education in seduction soon grows into an intense and hot romance. But then Nate’s past and commitment issues rear their ugly heads, and Olivia is left broken-hearted. When Nate realizes he’s made the biggest mistake of his life, he will have to work harder than he ever has before to entice his best friend into falling back in love with him—or he may lose her forever…

I wasn't sure about Liv's story but her struggles resonated with me.  For poor Liv she doesn't see what everyone else sees when it comes to her.  She is surrounded around great friends and a new family but she is lonely.  She knows she has no chance for her gorgeous best friend but she is also tired of getting tongue tied when any cute boy pays her attention.

I believed in all the things written within me. I'd just somehow along the way stopped believing in my book jacket. I don't know why. But I don't thing that was ever meant to happen. I don't think I was ever meant to be the kind of person who questions her own adequacy; who allows anyone to make her think she's lacking in some way.

For Nate he is definitely a player but it is only to protect his heart because losing the love of your life at an early age is hard to move on from.

Olivia wants to move forward so she asks for help from her best friend Nate to give her experience.

"I don't want to be the person who looks in the mirror and hates what she sees, or be the person that moans about how she can't interact with a guy long enough to secure a date. That's not a good person to be, Nate. I just want to be like everyone else. Have a relationship with the opposite sex. But I can't. It's pathetic. But at least I'm not pathetic enough to moan about it."

Nate jumps at the chance to teach Liv love lessons without getting emotional attached. What could go wrong with blurred lines.

"... Friends are important to me, Liv. And last night a friend cried in my arms and admitted she was unhappy." He brushed my cheek affectionately. "You deserve happiness, babe. What's the harm in letting me help you to try to obtain it?"

Quickly Nate and Liv fall into bed and a routine of a relationship non-relationship. All goes well until feelings get involved.   With these lessons Liv realizes what she deserves at the same time she is fighting a ghost for Nates affection.

"I do. I'm very much in love with him. But he won't ever allow himself to love me the way he loved Alana.  She was his big love. I want to be be someone's big love, Dad. I think I deserve to have the man I love love me back just as much."

Moving on is hard once you fall in love.  Without each other the quickly realize what they are missing but the heart is on the line so it needs to be all or nothing with these two to survive.

"But I do need you to know that I'm going to fight for you. I'm not making the mistake of walking away from you again. The only man in your future is me, Liv. The only kid in your future are mine."

I loved Nate and Liv. Their struggles, friendship and love was beautiful and trying. Together they make each other whole.

"Alana was my first love and I'll never forget her. She's a part of me and always will be. But I know it's time to move forward, it's time to start living in the after. You're that for me, Liv. You're the love of my life."