Tempted by the Soldier (Falling for You #2) - #review 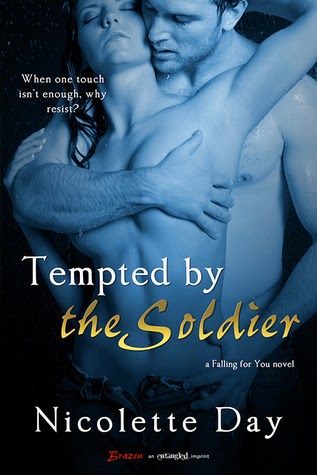 Tempted by the Soldier (Falling for You #2)

by Nicolette Day
When one touch isn’t enough, why resist?

Road trips are supposed to be fun. Or, at least, full of hot sex. For photographer Lilly Grayson, the fifteen-hour drive to her friend’s wedding with Nate Jennings will be neither. Not that Nate isn’t sexy—the man is six-foot-three-inches of mouth-watering Marine. But Lilly’s been there, done that…and he walked away. Now it’s time for a little payback. The kind that’ll make a man desperate for a taste of what he can’t have.

And Nate wants a taste—so badly that he can barely keep his hands on the wheel. But the scars and ghosts of his last tour still haunt him. He can’t give into temptation, not this time. Lilly deserves a whole man—one who can love her the way she deserves to be loved, even if she doesn’t believe it can happen. And that can’t be Nate. Not when he’s leaving again in two weeks, and this time, he’s not sure he’ll return…

So this a book 2 of a series but it can be read as a stand alone as well.  Here we have Lily and Nate a year after a one night together and still having resentment towards one another.

To Lily that night meant everything to her and she finally took the chance to let someone in.

To Nate that night caused emotions he was not ready to deal with so he did the only thing he knew how to do was run and push her away.

A year later both of their feelings are unresolved. Nate is determined to keep Lily at bay while Lily is determined to torture Nate and let him know that she has moved on.  A good plan that back fired on both of them as they are forced to spend 15 hrs in a small truck cab together.

Between the sexual tension and mother nature 15 hrs turns to 3 days.  These three days has a lot of steam, angst, grief and loss.

As Nate is fighting his demons he pushes Lily to far until he realizes what he needs to fight for.

"Tell me what you want, Nate." "You," he whispered, voice cracking with emotion. "It's always been you."

Quick steamy read even though for the most part it is big ol' foreplay called sexual tension that finally can't get denied then poof fireworks then my favorite... HEA.

My Review | No Strings Attached (Falling For You #1)
Posted by Live Read and Breathe at 00:00