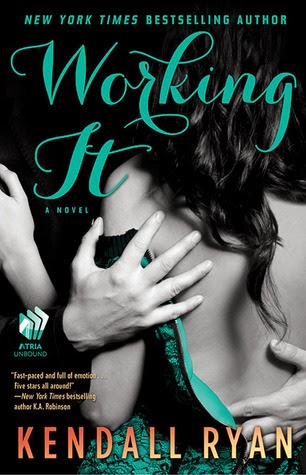 Working It (Love by Design #1)

by Kendall Ryan (Goodreads Author)
Emmy Clarke is out of her depth in New York City’s fashion world, but when she lands a job as an assistant at a modeling agency it seems like the perfect mix of business and pleasure. Working under the notorious Fiona Stone is a nightmare, but there’s one distinct perk: ogling the ridiculously hot male models who parade through the office—particularly rising star Ben Shaw.

Ben is everything Emmy’s not: exquisitely gorgeous, highly paid, and well-traveled. He’s also got more issues than Vogue. Emmy looks after Ben on photo shoots, but she refuses to become another one of his lusting groupies. Ben finds Emmy’s refreshingly real attitude to be surprisingly attractive.

Against a backdrop of the most fashionable cities in the world, casual flirting turns into an illicit affair, but when Ben’s twisted past is revealed, and the bitter Fiona catches wind of their relationship, their careers and hearts are threatened.


Note: This book is intended for mature audiences. It contains sexual encounters and graphic language, including a m/f/m encounter

Here we have Emmy the meek country girl assistant to a Barracuda of a boss Fiona at a model agency in New York City.  Emmy is far away from her Southern roots but is trying to make this job work even though her boss is the biggest bitch ever.

Ben is the star at the model agency but doesn't really have a life besides modelling.  For the first time Ben wants more then what he has.   From the first moment he meets Emmy he is intrigued by her but has to keep that a secret from Fiona.

Fiona and Ben have quite the interesting relationship which is all kinds of disturbing and bad news.

As Ben & Emmy's friendship and flirtatious texts turn into the real deal emotions get brought to the surface for all parties.  I liked Ben and Emmy's relationship but for some reason Ben's dirty talk more annoyed me than stimulated me (don't be a hater a girl is allowed to her own opinion) but besides the dirty talk I liked the idea of them and how together Ben was so much more except for the ever present Fiona who kept ruining everything.

I can't believe how that storyline all played out.  And a semi cliff hanger. Arghhhhh I need to know what happens with Ben and Ellie and Ben's past like yesterday. I know the wait is going to kill me.


3 Working it thumbs up!